Adopted Children from China Exposed to Melamine in Milk?

When the world first learned of melamine contamination in Chinese milk products, the initial reaction was an instant flashback to melamine in pet food, and other China-sourced products that have been found to be contaminated. "Those poor babies over there," you may have caught yourself saying. "At least it's not happening here in the US." 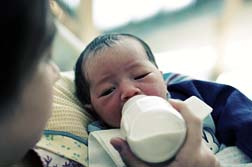 Not that melamine-laced milk and other food products are finding their way to American shores. Thankfully that has yet to occur. However, the issue is for the adoptive parents of children born on Chinese soil, and brought to America as adopted kids.

Experts such as the American Society of Pediatric Nephrology (ASPN) are quick to point out that Americans who may have adopted children prior to 2007 have no need to panic. In fact, parents should not panic at all.

Panic no, but be concerned and vigilant? But of course. Especially since there have been no conclusive studies on the affect of melamine—a nitrogen-rich substance used in the production of plastics—on humans.

We know the effect it had on pets. Who could forget the dark days of 2007, after thousands of pets were sickened and many died horrific, painful deaths as the result of tainted pet food? A Canadian company—a contract manufacturer and packager for many well-known pet food brands—unwittingly imported wheat gluten from China that was later found to be contaminated with melamine.

The contaminant sickened, and killed animals. Contaminated infant formula has also resulted in the deaths of 6 babies in China. For most, however the general result has been the appearance of kidney stones in children.

Kids aren't supposed to get kidney stones, so the melamine is a strong suspect.

The ASPN recommends that infants potentially exposed to tainted formula in 2008 and late 2007 should be tested if they are found to have blood in the urine, kidney pain, have unexplained fits of crying, or other symptoms that just don't seem normal.

Beth Flander's adopted daughter was just 17 months old when the American travelled to China this past September to bring her little girl home to Los Angeles. By then the issue of formula laced with melamine was just breaking. Fearing for her daughter, who had yet to start on solid foods, Flanders decided to have the little girl tested even though she wasn't exhibiting any symptoms.

Sure enough, an ultrasound revealed two kidney stones in a child not yet 2 years old. Was melamine to blame? Could be. And thousands of adoptive parents are asking that same question.

They're also angry, together with a world that has been hit with so many product scandals originating out of China: tainted pet food, anti-freeze in toothpaste, and contaminated heparin.

This latest product scandal appears to have all the markings of past misdeeds. Melamine was used two years ago to boost nitrogen levels in raw materials destined for pet food. Basically, sub-standard wheat gluten would score higher in food quality tests.

Cue the milkman, who dumped melamine in watered-down milk in order to elevate protein levels at testing time. Since then, melamine has been found in eggs, milk and infant formula, even candy. The tainted products in this case were mostly confined to China and other regions of the world that imported the products. The US, it appears, wasn't one of them.

However, what HAVE been imported are adopted children. And they run the risk of having ingested tainted food products prior to their transport to America by newly adoptive parents.

It has been reported that Sanlu Group Co., a dairy operation in China, knew 2 years ago that its products were contaminated, but did nothing. Actually, they DID do something—the company and local officials are alleged to have tried to cover it all up. Many of the perpetrators are now facing criminal charges in China, but that doesn't help the scores of children and their adoptive parents who may be affected.

And there's little information to go on. Officials have said that it is next to impossible to know if children were exposed to melamine-tainted foods while in China, prior to being adopted. Orphanages, for example, buying baby formula proven to be safe might have also supplemented that supply with donated formula, and other foods that were not.

And even though experts have suggested there is little concern for children adopted prior to 2007, members of an online support group have been finding some disturbing trends. An unscientific survey compiled by one member found that 84 percent of 132 children undergoing ultrasound had normal findings. But that means 16 percent did not, and even for an unscientific survey, such a percentage is significant.

Of the 16 percent, 8 children had kidney stones and another 13 exhibited enlarged kidneys, or other problems. In Flander's case, her infant daughter's kidney stones are fairly large, and she is awaiting further tests to determine if surgery is necessary.

More FOOD & SUPPLEMENT News
Her daughter came from an area of China where tainted milk was found.

So far, according to Chinese officials, the death toll remains at 6 from melamine-laced infant formula. So far 300,000 babies have become sickened. But those numbers reflect only the children still in China. Infants, and older children who have been lovingly scooped up by adoptive parents in America, are another story.

That said, parents of adopted children from China who are aware, or suspect a problem stemming from potential melamine contamination might be well advised to consult a lawyer conversant with the issue. Medical bills can be expensive—and you may have just embraced a child with a health problem caused by the simple greed of someone half a world away.

Those are costs you, or your child, should not be made to bear alone.

If you have suffered losses in this case, please send your complaint to a lawyer who will review your possible [Food & Supplement Lawsuit] at no cost or obligation.
Request Legal Help Now