The hoodia was just a load of hooey after all, according to the Federal Trade Commission. The FTC shut down a web site vending worthless food and vitamin supplements, and ordered the purveyors of the bogus products to relinquish $29,000 in ill-gotten profits.

Not only were the weight loss products little more than hearsay, with no substantive benefit, but also the spam e-mail used to troll for customers was illegal, and violated the Controlling the Assault of Non-Solicited Pornography and Marketing Act of 2003—better known by its short form, CAN-SPAM. 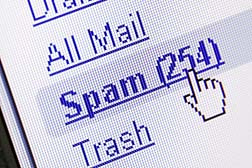 The spammers' strategy was to drive traffic to specific web sites where the bogus 'hoodia' supplements were sold. That's the first thing that landed the defendants in hot water—the claim that their products achieved rapid, substantial and permanent weight loss.

Ah, so you've seen the spam too, and wondered if the products worked? That is, if you had seen the spam at all, assuming that your spam filters were working at optimum efficiency.

But here too, the perpetrators were attempting to get around spam filters by using deceptive subject lines and false 'from' addresses in an effort to make the spams appear legitimate. What's more there was no physical address provided, and no opt-out link.

Under FTC rules and the CAN-SPAM statutes, that's a no-no and the perpetrators were made to cough up any revenue they had made from duped consumers desperate to lose weight by any means. As a result the FTC sued a group of defendants from the US, Canada and Australia and ordered the illegal operation shut down.

The foregoing is an example of the new frontier of food, food supplement and vitamin supplement fraud that is parlayed over the Internet. Using false 'from' addresses and misleading subject lines, the fraudsters will not only have a good chance at doing an end run around your spam filter, but also give you the false impression that you're opening up an e-greeting card, or a message from a long-lost friend.

Not only are law enforcement officials cracking down on this new-age fraud, but also consumers who have been duped are fighting back as well in court.

Add to that the number of lawsuits that have followed outbreaks of E: coli and mad cow disease, and you get the sense that consumers are ready, willing and able—thanks to qualified legal professionals—to make the food industry, and any purveyors of fraud answer for any injuries, death or deception that may ensue.

It may even come down to the traditional happenstance of finding a fly in your soup—or in the case of one hapless Subway customer, a knife in your sandwich.

Talk about giving a new meaning to the phrase 'cold cuts'…

More FOOD/SUPPLEMENTS News
John Agnesini, a 26-year-old magazine designer from New York, claimed that he had already taken a few bites from his Cold Cut Trio sandwich in late June when he spied the end of a blade jutting out from the bread's crust inches from his mouth. It turned out to be a complete knife with a seven-inch blade that, allegedly, had been inadvertently left in the sandwich after the restaurant worker, it is assumed, became distracted while the sandwich was being prepared.

Subway sandwiches are not made with pre-sliced breads, but are fashioned from fresh breads baked right at the facility. When a customer comes in and the sandwich is ordered, the customer picks from a selection of breads. Then the first thing the preparer does, is slice the bread lengthwise with a long knife.

"If I didn't know what would have happened," Agnesini told Reuters. "That's the last thing you think about a sandwich you eat all the time."

He is suing the chain for $1 million in a lawsuit filed in New York State court in Manhattan.

If you have suffered losses in this case, please send your complaint to a lawyer who will review your possible [Food/Supplements Lawsuit] at no cost or obligation.
Request Legal Help Now