A total of 1,715 cartons of bunched spinach were reportedly recalled after routine testing revealed it could spark a food poisoning outbreak if released to the public. 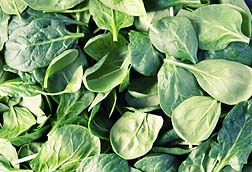 According to the California Department of Public Health, Ippolito International is voluntarily recalling spinach that was harvested September 1-3 and sold to retailers, Pasadena-Star News reports.
So far, there have been no food poisoning reports concerning the tainted spinach.

More News
Butch Corda, Ippolito's general manager, said this was the company's first food recall and it did so because it was a public health issue.

"Conducting this voluntary recall is the right thing to do for our customers and consumers," Corda said.

A total of 1,515 cartons of the spinach were reportedly packed under the Queen Victoria label and sent to various locations around the country that include California, Arizona, Georgia, Indiana and New York.

The recall also affected approximately 200 cartons that were packed under the Tubby label.

In September of 2006, Southland markets pulled pre-packaged spinach after federal officials reportedly linked the food product to a bacteria outbreak that killed one person and made about 100 others sick.