It's not too difficult to find a policyholder disgruntled with their insurance provider and Unum life insurance in particular. In general insurers are only too happy to relieve people of their premiums each month only to balk when it comes time to give back. Such is often the case with Unum Provident. A recent lawsuit over Unum long-term disability that went to trial twice is yet again under appeal. 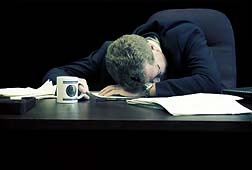 It was in 2005 that a trial judge in Nevada awarded G. Clinton Merrick $1.6 million in his lawsuit against Unum, plus another $10 million in punitive damages for a total award of $11.6 million.

However the 9th Circuit Court ordered a retrial of the punitive award. Four years later, in June of last year the decision of a Nevada jury only served to plunge the dagger into Unum even deeper by awarding $60 in punitive damages to the plaintiff, increasing his original award six-fold.

A spokesperson for Unum said that in their view the award is unsustainable and the company is appealing. Even so, the trial judge reduced the award to $50 million.

G. Clinton Merrick had pursued successful careers as a vice president for General Foods, then later as a venture capitalist until he was diagnosed with Lyme disease following a severe bout with chronic fatigue syndrome. The illness forced the high achiever to abandon his career.

But Merrick was also prudent and had purchased long-term disability insurance from the Paul Revere Insurance Company. When it got to the point that Merrick could no longer carry on with the increasing chronic exhaustion and what he described as 'a permanent flu,' Merrick notified his insurer. Paul Revere Insurance Co. paid out Merrick's benefits according to the provisions of his policy, until Unum Group purchased the enterprise a year later.

Various nuggets of truth came out of the twin trials. For one, a memo to company executives from the head of claims at Unum life insurance indicated that the department was on track to terminate $132 million in claims for that particular quarter.

To that end there were also minutes from various meetings of the claims department, together with company emails that clarified the company's targeted goals for terminating insurance claims.

Much of that behavior has been sensationalized in the mainstream media such as '60 Minutes' and 'Dateline,' thus it is no secret that Unum Provident was engaging in various bad faith insurance practices.

Given that the retrial was for the punitive award alone, the appeal relates to the increased punitive award to $60 million from $10 million (reduced, overall to $50 million by the trial judge). Merrick already won on his claims of Unum disability and bad faith in 2005, and it is therefore assumed that Unum paid out the original $1.6 million from the first court case.

While the case for punitive damages continues to hang on appeal, millions of policyholders the world over continue to hold Unum life insurance policies in good faith, hoping that the regular payment of premiums without default will bode well when the day arrives that Unum long term disability is actually needed. It is when benefits are triggered, that Unum Provident often shows its true colors.