The Uniformed Services Employment and Reemployment Rights Act (USERRA) of 1994 protects employees from losing their job, being demoted or being otherwise "adversely affected" because of National Guard or reserve duty. However, the issue of reservists leaving work has become an increasingly major problem since reserve troops were activated for the war in Iraq. 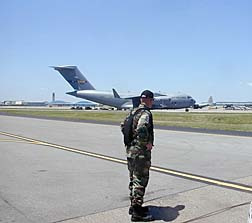 Since 9/11, most employers have supported US troops and reservists, especially large corporations. However, many small businesses are suffering: an employer has to train someone else to take his place and for a period of time, often cover benefits for both employees. But, just like paying taxes, it is a burden that must be accepted and the price the US pays for its policies.

Unfortunately, not all corporations and/or employers see it that way.

LawyersandSettlements.com recently interviewed [ Matthew Fillion ], terminated after military deployment by a major university. In a similar incident, James Sutera, an Air Force reservist, claims he was demoted by Rochester's school district because he took a 10-week military training leave. Sutera was told by an official that his "timing was bad" and he was told "not to get patriotic." Sutera subsequently filed a lawsuit against the school district, claiming they violated USERRA.

In the same month, on August 21, The Rochester Post Bulletin reported that the Mayo Clinic violated the rights of a paramedic when he returned to work after three tours of duty in Iraq. None of the three employers mentioned above could be considered a "small business".

The National Committee for Employer Support of the Guard and Reserve (ESGR) is an agency within the Office of the Assistant Secretary of Defense for Reserve Affairs. It operates programs directed toward U.S. employers, employees, and communities to ensure understanding of the role of Reserve component members.