Environmental Law: Whistle-blowers Have the Wind at Their Back

Sarah and Ray Dean are proof positive that you can take the environment into your own hands, and make a difference for the benefit of all. The Lawrence, Kansas couple has filed an environmental lawsuit demanding that the state limit carbon dioxide emissions. 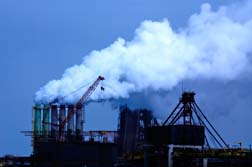 The Environmental Protection Agency (EPA) is the country's environmental watchdog. Working in concert with federal and state regulators, the EPA keeps tabs on issues and instances that have the potential to cause people physical harm and ill health from toxic emissions, toxic waste, chemical spills and other man-made maladies that are usually the result of carelessness and/or irresponsible practices.

Many a citizen has cried foul at the appearance of a known polluter taking over the vacant lot next door, the sight of mysterious pollutants pouring into a river or stream, or mysterious illnesses that suddenly befall an entire community. Anyone with fond memories of the movie Erin Brockovich will recall the back story behind the gutsy single mom pursuing the corporate juggernaut, and toxicity in the soil that was making people sick - or dead.

In April of this year the U.S. Supreme Court ruled in a 5-4 decision that greenhouse gasses are, indeed a pollutant and ordered the EPA to reconsider its stance with respect to controlling those emissions.

The Dean lawsuit, filed in Shawnee Country District Court in late May, argues that the Kansas Department of Health and Environment (KDHE) is legally on the hook for the regulation of carbon dioxide.

The timing of the lawsuit appears to have much to do with proposals currently before the KDHE on behalf of Sunflower Electric Power Corp to build two, and possibly three coal-fired power plants near Holcomb, Kansas. If built, the facilities have the potential to push 15 tons of carbon dioxide into the air, each year. The Lawrence City commission disapproves of the project, and voted last year to urge the KDHE to turn it down. What's more, attorneys general from eight neighbouring states have given it the thumbs-down too. But it appears dollar signs may take precedent over fears of global warming and climate change.

Still, the massive societal shift towards real concern for our environment and the potentiality for climate change may not leave us willing to give up our SUVs just yet (despite the high cost of gas) - but the increasing momentum continues to drive reform in some sectors.

In late May, HSBC Bank USA agreed to pay nearly $1 million in fines and re-imbursements to settle a state lawsuit concerning the clean up of a toxic site in Orange County, New York. It is believed to be the first ruling brought against a bank under the federal Superfund act, which is the common name given to the Comprehensive Environmental Response, Compensation and Liability Act (CERCLA), enacted by Congress on December 11th, 1980. The Act includes a tax on the petroleum and chemical industries, which in turn maintains a trust fund used to help facilitate the clean-up of abandoned or uncontrolled hazardous waste sites. Currently, $1.6 billion resides in the fund, and CERCLA gives the feds broad authority to respond to unfolding contamination hazards.

For HSBC Bank USA, it was fulfilling its obligations as the lender for the former Westwood Chemical Co. in Wallkill. It was in 2004 that HSBC seized the operating assets of a then-struggling Westwood, which resulted in the closure and abandonment of the site. HSBC Bank took over ownership of the site, and therefore was deemed responsible for the clean up.

The bank did so willingly, and on the same day the settlement was announced its parent, HSBC Holdings Plc in London, announced a global initiative to combat climate change through an investment of $100 million.

Such is the sensitivity and social responsibility of all things environmental that few would be tagged a complainer for objecting to toxic waste, mysterious chemicals, unsafe drinking water, and smoke stacks belching huge gobs of emissions into the same atmosphere your kids breathe. Litigating for clean air and a healthy environment is not only socially acceptable; it's morally a requirement now. No individual having seen Al Gore's 'An Inconvenient Truth' could live with standing by while someone - corporate juggernaut or unthinking neighbour alike - introduces uninvited and repulsive chemicals into our air, land or water.

It is alleged that the two processors pump 360 million gallons of poultry waste to a failing wastewater treatment facility in Timberville, Virginia. The sludge easily overwhelms the treatment facility, and winds up spilling into the north fork of the Shenandoah River.

Don't even ask what's in that poultry sludge. You don't want to know. Let's just say it ain't good for ya.

However, three groups did want to know, found out, and are now taking the corporations to court over the illegal dumping, and responsibility towards the needed expansion and rehabilitation of the wastewater treatment facility. It's not only good business, but also these days siding with Mother Earth and doing the environmentally responsible thing is quickly becoming a moral obligation. And it's good business, too.

If you are aware of, or are affected by an environmental hazard, speak up. If not just for yourself, speak up for the sake of your family, loved ones and neighbours.

The mandate of the EPA is to protect human health and the environment. Any violation deserves to be exposed - and you have the laws, as well as public opinion, on your side.

If you have noticed a violation of an environmental law, please contact an [Environment Law Lawyer] who will review your case at no cost or obligation.
Request Legal Help Now