It has been ruled by a federal appeals court that the Clean Air Act has been violated by a rule created by the EPA. The EPA evaded cuts in toxic mercury pollution from oil-fired power plants and pollution from coal that violates environmental law. This ruling takes the validity out of the EPA's "Clean Air Mercury Rule." This rule would have permitted dangerous levels of mercury to be emitted and continue under a weak cap-and-trade program that would not have gone into full swing until somewhere way beyond the year 2020.

In 2005, fourteen states, environmental and public health groups, Native American tribes, and organizations comprised of physicians and registered nurses challenged the group of rules created by the EPA. The United States Court of Appeals for the District of Columbia Circuit's Ruling criticized the EPA for trying to create a loophole that would benefit the power industry, rather than implement the Clean Air Act and the tough emission standards that come with it. The states that are presenting the challenge against the EPA are Connecticut, California, Delaware, Maine, Illinois, Minnesota, Massachusetts, New Hampshire, New Mexico, New Jersey, Pennsylvania, New York, Wisconsin and Vermont. 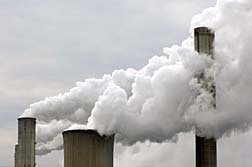 The EPA removed Power plants from the requirements considered the most protective of the Clean Air Act and the EPA's reasoning behind their actions was that the law gave them the authority to take such an action.

Both the American Medical Association and the Federal court are in agreement that the mercury program the EPA created for coal plants is flawed and is hazardous to health. They have stated that the decision of the federal appeals court is a victory for the health of Americans and for children because children can suffer from permanent conditions such as brain damage when exposed to mercury pollution.

It is estimated by the EPA that there are as many as 600,000 babies born each year who are exposed to high blood-mercury levels from their mothers as a result of fish contaminated with mercury. It is said that such exposure can cause serious harm to the child.

Now, the claims of coal companies that they are producing clean coal are going to be put to the test. The reduction in mercury pollution is more or less a trial run to see if coal is still as effective an energy source with the reduced use of mercury, which could mean a cleaner future when producing energy.

The EPA's actions that were declared as unlawful on Friday included the removal of power plants from a regulatory list that requires compliance with the Clean Air Act's toughest safeguards against pollution that is deemed toxic. The tough standards of the Clean Air Act would have been replaced with much weaker safeguards that would not reduce the mercury emissions from power plants all over the United States.

The EPA has been instructed by the court to follow the laws as they are meant to be followed.

More News
There are 450 power plants with 1,100 coal-fired units that emit around 48 tons of mercury into the air on an annual basis. To show the potency of Mercury, it only takes 1/70 of a teaspoon to contaminate a lake of 25 acres to the point that fish cannot be eaten. There are over 40 states that have advised their citizens against eating certain species of fish due to contamination by mercury. Over half of those advisories involve bodies of water throughout the entire state.

It is felt that Friday's ruling should show the EPA and power plants that the law does catch up to any loopholes that may be created to evade following rules for the sake of energy production that can damage the environment. With power plants being the worst producers and polluters of mercury, soot, smog, and global warming pollution agents, it is time that something is done.