A settlement has been reached between the world's largest oil companies and over a hundred public water suppliers in a lawsuit that claimed groundwater was contaminated by a gasoline additive. The amount of the settlement is for $423 million and the terms of the settlement, filed on May 7, 2008, are awaiting approval by the U.S. District Court for the Southern District of New York. 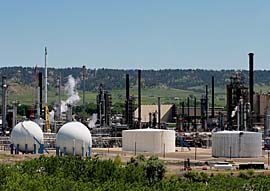 The terms state that the oil companies will pay 70% of the cleanup costs over a period of 30 years. The defendants that have agreed to the settlement and its terms are Royal Dutch Shell, BP, Marathon Oil, Chevron, ConocoPhillips, Valero, Sunoco, and Citgo. Amongst the other six companies named in the lawsuit was Exxon Mobil, which did not agree to the settlement.

The plaintiffs consisted of 153 water systems in 17 states, including New York and California. They claimed that the gasoline additive, methyl tertiary butyl ether (MTBE), was a defective product that led to widespread groundwater contamination. The lawsuit claimed that the oil companies continued to use the product although they knew it was harmful to the environment and also posed health risks.

MTBE, even in its smallest concentrations, can make drinking water undrinkable because the taste that it has and the odor that it emits is quite offensive. The U.S. Environmental Protection Agency had found that MTBE caused cancer in lab rats that were exposed to large doses.

For over ten years, there have been a number of lawsuits brought against the oil companies for their use of MTBE. The chemical has been used in gasoline since 1979 in order to increase the octane levels. The use of MTBE became more widespread in the 1990s when the Clean Air Act of 1990 required the use of oxygenate to reduce pollutants and smog in certain cities. When the chemical is mixed with gasoline, it makes the fuel burn better, which reduces air pollution. However, after its widespread adoption, it was found to have a negative effect on groundwater in the smallest amounts. The taste and smell of the water is similar to that of turpentine. This has led to MTBE being banned in 23 states.

More News
If this deal is approved, this would be the largest settlement ever awarded. The oil industry has fought quite hard to avoid any penalties imposed against them for use of the product. They have disputed that they should not have to pay the cost of cleanup because the EPA had mandated it to be used in order for gasoline to burn more thoroughly. The cleanup costs of MTBE have been estimated to cost in the tens of billions of dollars. Congress even tried to block manufacturers from being sued in 2003, but the senate strongly opposed such a provision. A second attempt also failed in 2005.

The attorneys for Shell and Chevron have said that no court has ruled that gasoline containing MTBE is a defective product. They have also stated that the settlement does not mean that the companies are conceding the point, but they are actually defending the product.

As for Exxon, the company's lawyers state that Exxon will compensate when they have engaged in conduct that has hurt people, but they do not believe that their conduct has caused any injury or damages.

This lawsuit was filed in 2003 by the individual water suppliers, but was later combined into one federal case.

Litigation that is pending will go to trial in September.

If you have evidence of environmental damage, please contact a lawyer who can help you with an [Environment Lawsuit] by reviewing your case at no cost or obligation.
Request Legal Help Now