Environmental Law: It's in the Air Tonight…

There is nothing hotter these days than the environment, and the heat being generated has less to do with global warming, and more to so with the sudden seriousness with which Americans are approaching the environmental issue. Environmental law is basking in an equally intense glow, as activity of every stripe—from building, to renovating, to digging—is subject to environmental scrutiny.

That is especially true when there are environmental disasters, and a particularly nasty one occurred just recently on the Mississippi River. 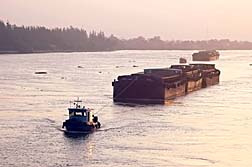 It was in the wee hours of July 23rd that a tug pulling a barge collided with an outbound 600-foot Liberian-flagged tanker dubbed The Tintomara. The barge was loaded with 400,000 gallons of thick, tar-like Number Six fuel oil. Tragically for the river and surrounding ecosystems, the barge split in half from the force of the collision and nearly all of those 400,000 gallons spilled into the water.

Officials halted traffic and commerce while a desperate clean-up effort was launched. Due to the thickness of the oil, it was deemed unlikely that the goo would evaporate on its own. The more likely expectation was that the sludge would eventually sink to the bottom after coating all plant and wildlife in its path. Environmental workers were hoping to contain the spill and extract the oil before that had a chance to happen.

While American Commercial Lines Inc. owns the doomed barge; it was being towed by a tugboat piloted by an operator with only an apprentice mate's license. No one else on board the tug Mel Oliver was licensed to operate the vessel. It has since been reported that only an operator carrying a Master's license is legally qualified to operate the tug, and some have suggested that the tug should not have gone out at all without a Captain aboard.

All this will likely serve as yet another case for environmental law, in an effort to assess and assign appropriate blame for a catastrophic spill that not only may have compromised the local eco system of the Mississippi River for years to come, but also affected shipping traffic along the Mississippi—delays that could have cost thousands, if not hundreds of thousands of dollars in lost business.

Environmental law without question would have come into play in the context of last year's disaster in California, where 53,000 gallons of toxic fuel spilled into San Francisco Bay after a container ship struck a bridge support. Last week a federal grand jury charged Fleet Management Ltd., a company based in Hong Kong, with six felony counts of making false statements and obstructing justice.

Under US law, passage plans are required for each voyage. However Fleet Management "falsified and forged these plans after the crash and concealed, and covered up the real ship records," according to comments attributed to prosecutors appearing in the Times-Picayune.

More ENVIRONMENT News
And that's only the beginning. Fleet Management is already being sued by the US Department of Justice for breaking environmental laws—and the captain of the ill-fated Cosco Busan, John Cota, is named as co-defendant alongside Fleet Management, given that he was responsible for guiding the huge vessel safely out of port. Cota has also been charged with two felony counts of lying to Coast Guard officials about his prescription drug use, and is also facing charges for two misdemeanor environmental crimes.

As long as there is environmental crime, there will be a growing need for environmental law professionals to either litigate, or defend.

After all, the environment is just too important a cause, to leave up to amateurs. Environmental law legal professionals are skilled in the complexities, and nuances of environmental law, and how it affects you.

And yes, it DOES affect you—even discounting the impact global warming is having on the entire planet. It's happening right in your own backyard. That's especially true if a neighbor, or some other entity is doing something next door that could leach, or drift across the fence and affect you, and your family.

That is what environmental law is for.