Lucite and DuPont Fined for Pollution in Belle

Two days before Earth Day this year, two giant corporations agreed to pay a combined $2 million in fines for polluting the air. Such activity is not only an affront to environmental law; it also appears to be a corporate thumbing-of-the-nose at wise stewardship when it comes to environmental issues. Critics maintain that environment law deserves more respect than that. 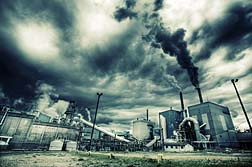 Lucite and DuPont also decided of their own accord to shut down the sulfuric manufacturing unit of a larger chemical facility at the site, which is located on a 100-acre manufacturing complex along the Kanawha River.

Good on them. However, you may want to consider holding back the applause, given the allegations leveled at the two corporations by the state of West Virginia and the United States of America. In a joint complaint, the two levels of government accused Lucite and DuPont of modifying their plant in 1996 without first acquiring pre-construction permits and installing the required pollution control equipment.

That's a violation of the Clean Air Act.

The facility is owned by Lucite International and operated by DuPont. In closing the sulfuric acid manufacturing unit, which will happen in April of next year, it is assumed that the two companies may be trolling for brownie points. However, once the unit is closed, 14 years will have gone by since the modification in 1996 without the necessary pollution controls. That's 14 years of spewing unfettered emissions into the air above Belle.

"This settlement is part of the U.S. government's dedicated effort to bring all sulfuric acid manufacturers into compliance with the Clean Air Act," said John C. Cruden, acting assistant attorney general in charge of the Justice Department's Environmental and Natural Resources Division, in a statement.

How dedicated that effort might be, in view of the 14-year supply of pollutants allowed to drift into the atmosphere above Belle is subject to interpretation. And while area residents would cheer the closure of a source of pollutants, they could be forgiven for feeling somewhat violated by the thought of breathing in contaminated air for such a long period of time.

More ENVIRONMENT News
The potential for emergence of health problems only adds to a frustration that may see its vetting in the courts of law. Given the length of time that pollutants were allowed into the air, one wonders about the related environmental issues and the impact on environment law. Such laws, after all are in place to protect citizens from the dangers of breathing bad air. If we are what we eat, we are also what we breathe. Environmental law is not only there to force compliance on the part of industrial entities, it also serves as a platform for litigation when such compliance is avoided.

If you, or a member of your family suffers from health problems and you live close to an industrial site that spews pollutants into the atmosphere, a call to an Environment Law attorney would be most prudent.