An issue that is bound to appear with increasing frequency in the area of environmental law, is the impact that home renovations have on individuals and especially children. Of all the environmental issues of the day, one of the oldest has been concern over lead paint, leading to its ban in 1978. Given the failing US economy, environment law could face a challenge of enforcement, with regard to home renovations. 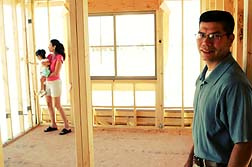 Earlier this month it was revealed that home renovation and related activity continues to be a source for lead exposure in young children. The Centers for Disease Control and Prevention (CDC) based in Atlanta updated an assessment of lead-exposure sources in New York State that was first conducted in the 1990s. This latest analysis, stemming from a period bordering 2006 to 2007, reveals that home renos remain the culprit in 14 percent of cases of high lead levels in children. According to Reuters, New York City was excluded.

This is up from 7 percent in the original assessment conducted more than a decade ago—and it's bound to get worse.

That's because in a soft economy characterized by a glut of houses on the market, more people may opt to repair and renovate their existing home, instead of moving to another one.

It's a buyer's market to be sure—recent reports have indicated that homes in previously-coveted south Florida that were once worth upwards of $750,000 just a few years ago, have spiraled downward to the mid-$200G level today. Certainly a steal for anyone with cash at the ready. However, until President Obama's stimulus package prompts the banks to begin lending again, homebuyers may not achieve the loans they need to buy.

And that's assuming a homeowner can sell.

The alternative is to renovate, and here's the real issue: the percentage of homes in certain areas of the country built prior to the 1978 lead paint ban, together with those built prior to 1950 when the level of lead found in paints were higher.

In New York State alone, there are 3,309,770 units of housing built prior to 1950. That's 43 percent of the housing supply in the state, and is a level higher than that found in any other state of the union.

Thus, as homeowners hang onto their existing homes and opt to renovate rather than move, occupants of the home and especially children are at risk for elevated blood lead levels.

Even a re-painting job, which involves the scraping and removal of old paint, can pose a significant risk.

The risk, and the task of renovation given higher awareness of environmental concerns can be likened to the modern-day precautions mandated when asbestos is present. However, do homeowners take similar precautions?

And what if there is a health issue stemming from a home renovation, when the original structure dates back prior to 1978, or 1950? And what, if any is the responsibility of a professional renovator of contractor who is hired to undertake such work?

According to the CDC, the subject is serious business. It is recommended that occupants be re-located during paint removal and that children and pregnant women be excluded from the work area, which should be isolated from other areas of the house.

Any activity that creates lead dust or fumes should be avoided. Rather than leave dust and debris to lie around, a full cleanup should be done after work is completed. There is also a recommendation that blood lead levels should be monitored in persons who live or work in the home.

Serious stuff. Given such concern, perhaps you would no longer be inclined to perform such a task yourself, but would rather leave it up to the professionals. And if that were the case, what are the precautions employed by a professional renovator or contractor, in light of these recent findings?

Should a health problem arise, it's kind of hard to litigate against dear old Dad for failing to tarp off the room in which he is working with lead paint. However, it is not unreasonable to expect that a professional organization would take the necessary precautions.

What are the regulations currently at play, in your home state, with regard to home renovation and health? Hazardous materials? Prevention? These are questions for a qualified attorney.

There is no question that the landscape is changing and not just from the economic climate, either. Just this week it was revealed that the Environmental Protection Agency (EPA), in fulfilling its mandate to address new sources of pollution and environmental hazard, is actually looking at the possibility of farm dust containment.

How that would work remains to be seen. However, it should be apparent by now that when it comes to the environment and environmental law, the status quo no longer applies. Old rules die hard, but they DO die. And the long tradition of Mom and Dad undertaking a renovation on the old family homestead may become a thing of the past, given environmental concerns with regard to lead paint—and further, with regard to the presence of asbestos in older homes.

In the 2006-2007 investigation, homeowners or tenants performed 66 percent of the renovation, repair and painting work, which often included sanding and scraping old paint and other activities that may release particles of lead-based paint.

Nearly three quarters of the children assessed in the most recent CDC study were 1 to 2 years old and 25 percent were 3 to 5 years old.

If you have children or a pregnant partner in an older home currently being renovated by a professional who has not taken adequate precautions to ensure your safety, seek advice from a qualified environmental law attorney. Such environmental issues should not be ignored, especially if your family's health is at stake.