A small endangered fish called the Nooksack Dace that lives in the small streams of British Columbia's Fraser Valley, is moving closer to being protected with a recover strategy that has been re-released that identifies the habitat that it needs in order to survive. The federal government identified the critical habitat of the Dace after a lawsuit was filed by a group of Canadian Conservation Groups. This new recovery strategy was released on March 12, 2008.

The federal Species at Risk Act (SARA) says that the identification of the critical habitat to the fullest extent possible in recovery strategies is crucial to the species' survival. Many of the species that are listed under the SARA have suffered extreme destruction or loss of their habitat. The critical habitat protection and identification is very important to the recovery of these species. 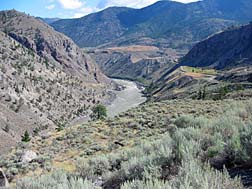 A lawsuit was filed against the Minister of Fisheries and Oceans by Georgia Strait Alliance, Environmental Defense, the Wilderness Committee, and the David Suzuki Foundation in August 2007. The lawsuit alleges that the Minister failed to identify the Nooksack Dace's critical habitat in a recovery strategy that was released in 2007.

However, the response to the lawsuit was the re-release of the recover strategy for the Nooksack Dace and this seems to be an ongoing trend. In a similar case filed in 2007, a lawsuit was filed against Environment Canada for not identifying the Piping Plover's critical habitat, which is an endangered shore-bird. This case, like the Nooksack Dace case, revised the recovery strategy to include critical habitat after the releasing of the lawsuit.

More News
A lawyer for Ecojustice, Devon Page, said in a statement that it was a victory for the Dace that going to court got the critical habitat identified, but it also reveals a broken process. He further stated that it is a waste of resources and energy on both ends of the lawsuit to have to file a complaint against the federal government for each and every endangered species that does not have its critical habitat identified in order to sustain its survival. So far, out of 260 endangered species, the government has only identified the critical habitat of 18 of them.

Ron Thompson, a federal Environment Commissioner, released a report early in March that was critical of how the federal government implements SARA. In his report, he expressed concern about the delay in recover strategy releases.

Dr. Mike Pearson is the scientist that did the mapping for the Nooksack Dace's habitat that was later removed. He said that he is glad that the habitat is now being protected, but it is a shame that it took a lawsuit for that to happen.

Others feel that the approach to protect the habitat of these endangered species needs to be more proactive or they will never be recovered.