According to the nonprofit group Forest Service Employees for Environmental Ethics, fire retardant has a negative impact on the environment. As a result, they are challenging a decision by the U.S. Forest Service to continue using the substance on forest fires.

The executive director of the organization, Andy Stahl, says that the Forest Service is delusional if they think there is no impact on the environment, especially when the fire retardant is dumped in streams. Stahl says that in 2002, around 22,000 fish were killed when fire retardant was dumped into the Fall River in Oregon. He says that the effect it had was comparable to sterilizing the river for miles. 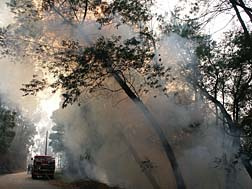 A federal judge upheld the assessment by the Forest Service and the service is now going forward with adding a 300-foot buffer zone around all waterways so that the retardant cannot be dropped in those areas. There will also be monitoring of the areas where the retardant is used and testing of the retardant. As for the buffer zone, it has been in place since 2000.

More News
But it is the biological opinions from the National Marine Fisheries and the U.S. Fish and Wildlife Service that has showed fire retardant is dangerous to the survival of dozens of endangered or threatened species. Stahl says that the plan of the Forest Service would still allow retardant to be dropped on waterways if it meant putting out a fire.

Stahl is hoping that the lawsuit that was filed on April 2 in Montana's federal court will make the Forest Service look at the fire retardant issue and also take a look at the overall strategy used to fight forest fires. Stahl says that the fire retardant issue is just one way to get attention for a larger issue, which is how to deal with fire when it occurs. Since fire accounts for half of the budget set forth by the Forest Service, Stahl feels that the general public and scientists should have a say on the matter. He says that fighting fires is bankrupting the Forest Service, so something needs to be done since every fire gets worse due to the dead wood that results from previous fires making the event even worse.