ooklyn, NY: An environmental lawsuit has been threatened against three Brooklyn companies accusing them of polluting the Gowanus Canal in the borough. 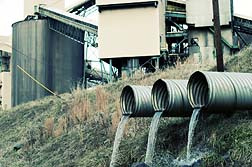 Riverkeeper, a nonprofit environmental group, reportedly filed notices of intent to sue the companies for allegedly dumping various materials into the canal, the Brooklyn Eagle reports.

More ENVIRONMENT News
According to the group, Sixth Street Iron and Metal reportedly dumped metal and debris into the canal; the Ferrara Brothers Building Materials Corp allegedly discharged liquid cement and stone into the area; and the 107 Sixth Street LLC and 36-2nd-J Corp reportedly operates an open dump of various material.

"It's a shot across the bow," Joshua Verleun, Riverkeeper staff attorney and investigator, told the Eagle. "It's a way of saying we've been patrolling, we caught you doing this, now you need to do something about it."

This is the first step in filing a citizens' lawsuit under the federal Clean Water Act and Resource Conservation and Recovery Act. The accused companies now have 60 days from the date of filing to change their alleged polluting.