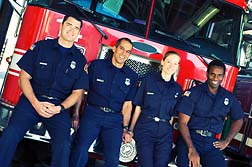 Such is the unique case pitting a collection of Caucasian firefighters from New Haven, Connecticut against the City of New Haven with regard to the results of an intensive promotional exam.

According to a story published June 29th 2009 in the New York Times, the plaintiffs in Ricci et al v. DeStefano at al, No. 07-1428--17-- white firefighters and one Hispanic—prepared intensely for a test used to gauge a candidate's suitability for promotion. According to the report many of the candidates gave up second jobs and took a pass on family celebrations in an effort to fully prepare for the test.

The lead plaintiff, Frank Ricci, is dyslexic and was reported to have studied anywhere from 8 to 13 hours a day in an effort to achieve the best results possible. According to the New York Times, Ricci actually hired an acquaintance to record—on audiotape—the study materials for him.

When the results of the testing came in, it was found that as a group the white firefighters performed well, while African-American firefighters were reported to have done poorly.

The city's response was to discard the results across the board. The white firefighters sued in a case of reverse discrimination.

In a 5-4 majority ruling June 29th the Supreme Court found that the plaintiffs were subjected to race discrimination when the City threw out the results.

More EMPLOYMENT DISCRIMINATION News
"The city rejected the test results solely because the higher scoring candidates were white," Justice Anthony Kennedy wrote for the majority, adding that the possibility of a lawsuit from minority firefighters was not a lawful justification for the city's action.
"Fear of litigation alone," Justice Kennedy wrote, "cannot justify an employer's reliance on race to the detriment of individuals who passed the examinations and qualified for promotions."

The new standards resulting from the Supreme Court decision will make it tougher for employers to discard results of hiring and promotion tests after the fact, even in the face of a disproportionately negative showing from a given racial group.

If you have suffered losses in this case, please send your complaint to a lawyer who will review your possible [Employment Discrimination Lawsuit] at no cost or obligation.
Request Legal Help Now