Pilots Anything But Happy Campers

The words of a valued, experienced pilot are one thing. But the words of a hero are quite another. And when Chesley B. "Sully" Sullenberger III speaks now, everyone listens. They should. He has a lot to say. There is a lot to say, too about aging pilots and private pilot age. And even though private pilot license age can be as young as 17, Sullenberger was addressing the upper end of the demographic and a loss, over time, of that experience. 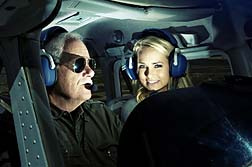 In a presentation to US lawmakers last month the chief hero of the successful ditching of US Airways flight 1549 into the Hudson River in January cited concerns over airline cutbacks and pay reductions that threaten the industry and public safety.

There have been numerous allegations in the past that airlines were cutting corners and jeopardizing safety. The most recent was last year, when the spike in crude oil prices produced an equal spike in the cost of jet fuel, which is refined from crude. There were allegations, since denied by the industry and still unproven, that airlines were reducing fuel reserves in an effort to cut fuel costs and trim weight from the aircraft. The ultimate fuel load required for a flight—including provisions for contingency—is at the discretion of the individual Flight Captain. However, some pilots reported pressure from their employers to trim fuel.

Sullenberger points to an even bigger problem that will grow as time goes on—the inability to attract new blood to the industry, not to mention the keeping of experienced pilots in the air. The raising of the retirement age to 65 two years ago helps. Prior to the change, the Federal Aviation Administration required that all commercial airline pilots retire at age 60. At age 58, Sullenberger would have had to retire within two years had the old requirement been left to stand.

It appears as if Sullenberger might not have been in a fiscally sound position to retire at 60 even if he was mandated to. The hero of Flight 1549 testified that his pay has dropped 40 percent in recent months. Airlines are attempting to pare back in response to a softer travel industry fuelled by the recession, but it appears such efficiencies have been partially borne on the backs of employees—and in many cases the pilots.

Sullenberger testified that he has had to resort to working 2 jobs—at 58—in order to stay flying and there are others, he says.

What's more his pension and that of his colleagues has been decimated and a lot of that has to do with the recent troubles of US Airways. The airline filed for Chapter 11 bankruptcy in 2002, emerging from court protection in 2003. However barely a year later the airline was in the throes of bankruptcy yet again, only to emerge in 2005 through its merger with America West Holdings Corp.

Prior to emerging from bankruptcy a second time, the airline demanded and got a series of concessions from its employees. Job cuts, wage and benefit cuts saved the airline $1.1 billion a year.

But at substantial cost, says Sullenberger. "My pay has been cut 40 percent," Sullenberger said. "My pension, like most airline pensions, has been terminated and replaced by a PBGC guarantee worth only pennies on the dollar."

The greater issue says Sullenberger, is the inability to attract good pilots to the industry given the less-than-attractive compensation.

"I am worried that the airline-piloting profession will not be able to continue to attract the best and the brightest," Sullenberger told the lawmakers in testimony February 24th.

Other pilots who have followed the story of US Airways Flight 1549 from the beginning, weigh in on their thoughts. Blogger 'Joe Pilot,' commenting on the Fox News website, is critical of the status quo. "The passengers of this flight were EXTREMELY lucky to have had Sully at the controls. Had this been a new captain flying with a 300-hour first officer, it is almost certain the outcome would have been different. I have seen how the public views and how the media portrays airline pilots and it is totally wrong. There is a HUGE difference between a 'love of flying' and working for the airlines."

Indeed, there are those who feel pilots are overpaid. That view, in light of the lingering recession that is shoving more and more people out of their homes due to foreclosure and into lineups for food stamps, would be understandable. However doctors and surgeons are often vilified for their compensation—at least until you need that life-saving surgery.

Critics are quick to point out that grown men are paid millions to play hockey, football and basketball.

More EMPLOYMENT News
The raising of the mandatory retirement age for pilots to 65 should help keep more experienced pilots in the air. However, if Sullenberger's concerns are borne out the industry will have a hard time attracting and keeping experienced pilots. And experience is what you want to have on the flight deck when something goes wrong. The alternative is an overall reduction of experience, resulting in younger pilots with fewer hours in command of a multi-ton airliner filled with other human beings. That's not a problem when things go according to Hoyle. It's when the unexpected happens, when inexperience is really tested.

Joe Pilot gets the last word: "I have tried for years to get someone's attention about what is happening to the experience level coming into the industry. I have written to Frontline and 60 Minutes urging them to investigate. In short, the Regional Airlines are REALLY bad: pilots sleeping 5 and 6 hours, sleeping at the airport or on the plane, not having money for food, flying sick, away from home 18-19 days a month, and being forced by chief pilots to fly illegally. Lastly, there is a good reason I want to be anonymous."

If you have suffered losses in this case, please send your complaint to a lawyer who will review your possible [Employment Lawsuit] at no cost or obligation.
Request Legal Help Now