Serevent: No Cause to Breathe any Easier

It could take your breath away, but Serevent is anything but romantic. The popular anti-asthma medication, manufactured by GlaxoSmithKline, is known scientifically as long-acting beta-agonist salmeterol, and has the potential for serious and even life-threatening complications.

For now, the U.S. Food and Drug Administration (FDA) agrees with supporters of the drug - the manufacturer among them - that the benefits far outweigh the risks, and emphasize that problems with Serevent are rare.

And Dr. Jeffrey Glassroth, Professor of Medicine at Tufts University in Boston, maintains that if the drugs weren't used at all, "we might prevent some adverse reactions, but we might create as many, or even more problems in our asthmatic population." 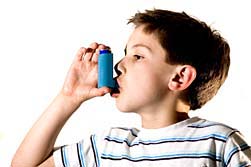 And yet, there have been deaths allegedly linked to the use of Serevent, and there are those who would like to see Serevent and all drugs in its class, pulled from the market.

Research conducted by Stanford and Cornell Universities has concluded that four out of five U.S. asthma-related deaths per year could be due to the intervention of drugs such as Serevent, in asthmatic patients. A statistical analysis of 19 published trials involving 33,826 patients concluded that while Serevent, and other long-acting beta-agonist bronchodilators are effective in relieving the symptoms of asthma, they also have the capacity to promote bronchial inflammation and sensitivity, without warning. This can choke off the air supply to the patient.

As such, the medicine that's supposed to relieve their symptoms has the disquieting potential to also relieve them of their lives.

Ms. Chavez lost a child to asthma - and potentially, to Serevent. Her asthmatic daughter was prescribed Serevent on September 13th, 2002. Within four days, Chavez' daughter was dead.

B Haines (not her real name pending a lawsuit) lost her only daughter to an asthma attack. The little girl, only 11, was taking Serevent.

And Diana S. from New Jersey believes her health has been permantly compromised as the result of taking Serevent. She was hospitalized with a severe asthma attack shortly after being prescribed Serevent. She's off it now - her doctor switched her to a different medication - but Diana reports she has more health issues now than she ever did before first coming into contact with the Serevent inhaler.

Dr. Jeffery Glassroth, of Tufts University, maintains that a more effective response is the stricter adherence to guidelines "that suggest (long-acting beta-agonist bronchodilator inhalers) aren't first-line therapy," he says. "There are other things to be used first..."

Still, that didn't prevent the FDA from issuing a warning last year suggesting that the drugs could worsen symptoms of asthma, and even lead to death.

Lead author of the Stanford and Cornell studies, Dr. Shelley Salpeter - a clinical Professor of medicine at Stanford University and a physician at Santa Clara Valley Medical Centre in San Jose, California - reveals that use of Serevent inhalers and others in the long-acting beta-agonist family of drugs, more than tripled the risk of asthma-related death.

"These agents should not be used," said Dr. Salpeter.

Patients on Serevent should NOT simply stop using the inhaler. Regardless of the risk, doing so would not be safe. Instead, discuss your concerns with your doctor and pursue alternatives. The inhaled anticholinergics family of bronchodilators are safe and effective, according to Stanford's Dr. Shelley Salpeter.

Manufacturer GlaxoSmithKline is expected to gross billions of U.S. dollars in Serevent sales to consumers, this year.

If you have or a loved on has suffered from life threatening complications while using Serevent, please contact a [Serevent] lawyer who will evaluate your claim at no charge.
Request Legal Help Now