Landmark Court Ruling a Shot in the Arm for Parents

Stefan Ferrari does not do, at 10 years of age, what most boys his age do—talk a blue streak. In fact, ever since he was 18 months old little Stefan hasn't said a thing. His parents believe the vaccine he received at 18 months, in a round of booster shots, lay at the root of his silence. And now a landmark court decision, subject to appeal, clears the way for the Ferrari family to take their case to trial. 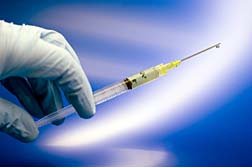 At issue is a mercury-based preservative known as thimerosal, which has since disappeared from standard childhood vaccines except for inoculations against the flu.
However, thimerosal was said to be contained in the booster shots administered to Stefan more than eight years ago, and his parents believe thimerosal is to blame.

They launched a civil suit against American Home Products Corporation—which is now known as Wyeth—in an effort to collect damages from the pharmaceutical company. However, a 1986 federal law known as the National Childhood Vaccine Injury Compensation Act (NCVICA) has been used previously to block other lawsuits against manufacturers of vaccines.

Needless to say the vaccine manufacturers are not at all happy with the ruling, and Wyeth plans to appeal to the US Supreme Court. A spokesperson for Wyeth, in statements posted at MSNBC online, made the point that other courts have agreed that federal law supercedes state claims for injuries, provided vaccines carry FDA approval and are accompanied by the appropriate warnings.

Indeed, seven other state courts have ruled previously that federal law pre-empts any state law, which may provide families the platform from which to litigate vaccine manufacturers for damages,

However the Georgia Court of Appeals disagreed, and ruled in a precedent-setting decision that the federal law—at least in this case—does not take precedence over state tort rules. The Court held that the federal statute was unclear.

Legal counsel for the Ferrari family argued that the federal statute was intended to supplement, rather than displace state law. It appears the Georgia Court of Appeals agreed not only with that position, but also with a request not to be influenced by earlier court rulings.

It wasn't. In his written ruling, Georgia Supreme Court Justice George Carley noted that the federal law "clearly does not pre-empt all design defect claims against vaccine manufacturers."

Rather, it is the Court's opinion that vaccine manufacturers must prove on a per-case basis that the adverse effect of any particular vaccine were unavoidable, in order to be considered immune from defective design claims.

More VACCINE RULING News
Thimerosal is still lurking, but reportedly only in flu vaccines that are not packaged into single doses. Given the fact that single-dose flu vaccines are available only in limited quantities, according to the Centers for Disease Control and Prevention (CDC) in Atlanta, it is possible for children to receive the mercury-based preservative when receiving a flu shot from a multi-dose supply.

Previously, claims have been made in court by the families of autistic children that thimerosal carries a link to autism, although the CDC rejects any such link.

Meanwhile, Marcelo and Carolyn Ferrari may now have to wait for their case on behalf of Stefan to clear an expected appeal by Wyeth to the US Supreme Court. It will be interesting to see if the Federal Court views the Ferrari case, given the challenge to federal law, in the same light as its State counterpart in Georgia.

Either way, this case will be watched closely by any parent whose child has been impacted previously by a vaccine, and could serve as a shot in the arm for families that have come up against legal roadblocks in the past.

If you have suffered losses in this case, please send your complaint to a lawyer who will review your possible [Vaccine Ruling Lawsuit] at no cost or obligation.
Request Legal Help Now