Over the Counter Meds: How Safe Are They?

With a prescription, you are at least getting some intervention and experience—and some restrictions—when required to ingest a medication. And as dangerous as some meds appear to be, you benefit from a second pair of eyes with decades of medicinal trench warfare behind them. However, how safe are over the counter medications? And who, besides a busy pharmacist, can guide you through the maze? 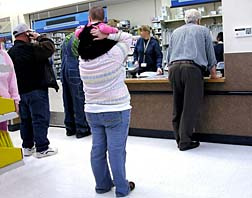 One can understand the preference for over the counter meds vs. more expensive prescription drugs. In most instances, you pay for them yourself. As it is, doctors are increasingly complaining that more and more HMOs are intervening in prescriptions, often requiring a less-expensive generic when the physician has defendable reasons to prescribe the more expensive name-brand drug.

To that end, pundits suggest that the day will soon be coming when doctors are routinely joined in their practices by slight little men wearing accountant's visors and wielding calculators. Whether they in the next room, on the phone or on-line, some can foresee a visit to the doctor's office as a two-step process: the examination, followed by the negotiation with the HMO over the drug prescribed.

Over the counter meds are less of an issue in this context, but there is still a concern when it comes to safety.

As with all drugs, it appears as though safety is not Job One when a drug secures approval from the US Food and Drug Administration (FDA). Risks are a given, and every drug carries risk. Just look at all those drug ads on television. Never mind the smiling faces and shiny happy people. Listen to what the announcer says, and never mind the sugar-coating—listen to the words. So many risks and side-effects. And yet, they are approved for use with consumers because what guides the FDA is benefit vs. risk. The benefits must outweigh the risks.

As for safety, it has been stated previously that the approval mandate is not to verify that a drug is safe, but that there is no reasonable conclusion apparent that a drug is not safe.

So what about over the counter drugs? How safe are they? No more safe than some prescription drugs, it appears. But the other issue has to do with efficacy and indications—the in-depth directions that usually arrive stuffed into the box alongside the bottle. There are summaries printed on the box, but the meat is found on the insert in print so small most would need a magnifying glass just to make it out.

Do people ever read this stuff? Rarely, if they can at all. They'll scan the box for the Cole's Notes version, and then throw the box and the insert away, leaving only the bottle. Chances are that after a few days, even the cursory information they may have gleaned, will be long forgotten.

Even for those who do their homework and read everything that comes with the box, it has been reported that many non-prescription drug labels are inadequate. For example, a few years ago it was found that the label for non-prescription OTC Motrin IB referenced the fact that "ibuprofen may cause stomach bleeding." However, there was no mention of the edema, blurred vision, nausea, heartburn, diarrhea, gastric ulcer with bleeding and/or perforation, dizziness, nervousness, rash and tinnitus that accompanies the prescription medicine.

Then there is the concern surrounding drug interactions. For example, it has been reported that there is no mention on acetaminophen labels that patients taking Coumadin, (warfarin), a popular and widely-prescribed blood thinner, could be in line for an interaction. Were a Coumadin patient to ingest four or more acetaminophen tablets each day for a week, there is a definitive risk of bleeding.

Here's another one: over the counter cough medicine. Ever take the stuff with DM? That stands for DextroMethorphan, which can interact with antidepressants like Prozac, Paxil and Zoloft to cause a serious condition known as serotonin syndrome. Symptoms to watch out for are muscle twitching, fever, nausea, dizziness, confusion, shock and even coma. There is also danger for anyone on a monoamine oxidase inhibitor (MAOI), drugs used to treat depression, psychiatric or emotional conditions, or Parkinson's disease. It is suggested that MAOI drug patients wait for two weeks after coming off the MAOI, before taking any cough medicine containing dextromethorphan.

MAOI drugs are not commonly prescribed. But here's the problem. Those who are, may not know that the drug they are taking is an MAOI class. They may also not know, because the label doesn't tell them, that if they were to ingest cough syrup with dextromethorphan too soon after coming off an MAOI drug, the interaction could be life-threatening.

More OVER THE COUNTER DRUGS News
At the end of the day, there are several things not in any over the counter drug's favor. One, is the misconception that if a drug is not prescribed, it can't be as potent, or as potentially lethal, complex or as problematic as a drug prescribed by a licensed physician. Second, few consumers read the label and there is no one requiring them to do so. Third, labels on over the counter medications are often not as thorough as that of their prescription cousins. And finally, like any drug approved by the FDA, safety allegedly takes a back seat to the mantra of benefit outweighing any risk.

Thankfully, the pharmacist is there to dispense advice. But too few consumers seek out that advice, and if the pharmacist is busy, most will just take the bottle or box and proceed to the checkout counter, unaware that the over the counter drugs they are taking with them, could harm them.

In the end, the best medication, is medication you don't have to take at all. But if you are harmed by taking an over the counter medication, take action and call a lawyer.

READ ABOUT OVER THE COUNTER DRUGS LAWSUITS

Over the Counter Drugs Legal Help

If you have suffered losses in this case, please send your complaint to a lawyer who will review your possible [Over the Counter Drugs Lawsuit] at no cost or obligation.
Request Legal Help Now