The stenting for profit industry hit a major snag on March 1, 2007, when the US House Oversight and Government Reform Committee, ordered Johnson & Johnson and Boston Scientific to turn over documents related to their sales and marketing activities for drug-eluting stents.

Drug-eluting stents (DES) are mesh tubes used in patients with heart disease to keep arteries open after a procedures called angioplasty to remove blockage. The new drug-eluding stents were developed to address the problem of restenosis, which prevents renarrowing of the artery. The relative benefits of DES when compared to bare metal stents was supposed to be a reduction of death, heart attack and vessel revascularization. 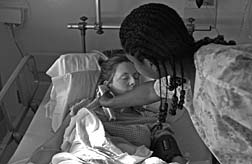 "Since the new DES arrived on the market, stenting has evolved into a multi-billion dollar industry for the stent makers and doctors and hospitals alike. According to the May 17, 2007 Wall Street Journal, "Americans spent at least $14 billion on coronary-stent procedures last year, including surgical and hospital fees."

Both J&J and Boston have received letters from Committee Chairman, Henry Waxman (D-CA), requesting documents to include correspondence with the FDA. The Committee also wants to know whether the companies used marketing funds to conduct clinical trials and how much researchers were paid and seeks information related to any adverse events revealed in the pre-approval clinical trials, as well as in post-approval use of the products.

In May 2007, after J&J announced that it would withdraw the Conor Medsystem's heart stent from the Indian market after the device failed to complete clinical trials in the US, the Drug Controller General of India raided the company's distributor's office in New Delhi and seized all existing stock of the heart stent, India's drug controller general M Venkateswarlu told the Economic Times on May 10, 2007.

The exact number of Conor stents currently on the market was still being assessed but the Times reports that thousands of patients in India could be at risk because an estimated 8,000 Indian patients have be implanted with the device.

Also the recent "Clinical Outcomes Utilizing Revascularization and Aggressive Drug Evaluation (COURAGE),"study published online on March 26, 2007, by the New England Journal of Medicine showed patients who received stents fared no better than patients who did not.

For the study, led by Dr William Boden of Buffalo General Hospital in New York, half of the roughly 2,300 patients underwent stenting procedures, took heart drugs, and were counseled to make lifestyle changes, such as losing weight, exercising, and giving up smoking and the other half received only lifestyle counseling and drugs to lower cholesterol, relax blood vessels, slow heart rate, and prevent blood clots. After an average of four and a half years, the study found a similar rate of death, heart attack, and stroke in both groups.

In an editorial accompanying the NEJM study, Dr Judith Hochman and Dr Gabriel Steg wrote: "The COURAGE trial should lead to changes in the treatment of patients with stable coronary artery disease, with expected substantial health care savings."

Experts note that there are massive profits at stake. In 2006 alone, combined J&J and Boston earned $3 billion from the devices. On December 4, 2006, Bloomberg News reported that in 2005, the new stents accounted for 52% of total sales for J&J and 43% for Boston.

In July 2007, the stent makers announced their second-quarter earnings and J&J revealed that sales of the Cypher in the US have dropped 41% from this time last year, while Boston released sales figures for its Taxus showing a drop of 42%.

In December 2006, an FDA Advisory Panel determined that off-label use, or using a stent for a purpose outside the device's approved label, is associated with an increased risk of stent thrombosis, death or heart attack compared to approved uses.

With a priced tag of $10,000 to $38,000, as many as 85% of the stenting procedures are non-emergency and are being performed on people with only partially blocked arteries for the relief of recurrent chest pain, according to March 23, 2007 Associated Press.

The first DES was approved in April 2003, and by December 2006, at a hearing on the "Prospective on Drug eluting Stents: Balancing Risks and Benefits," the Advisory Panel reported that 3 out of 5 implants were for unapproved uses.

Dr Ron Waksman presented the results for Contemporary Registries of Washington Hospital Center and reported that the rates of stent thrombosis were almost doubled in cases of off-label use compared to on-label use at 30 days and at 12 months.

He also said that in general, when they looked at on-label and off-label use, "the drug eluting stents are more thrombogenic than bare-metal stents."

For both on-label and off-label use, Dr Waksman said, "over time, late stent thrombosis is seen more in the DES versus the bare-metal stents."

Dr Peter Smith of Duke University told the panel that stenting is being performed on patients with high severity coronary problems such as 3 vessel disease who should be undergoing coronary bypass grafting surgery.

He presented data that showed in these types of cases, 1 out of every 20 patients who died after treatment with stenting would have survived if coronary bypass grafting would have occurred and that DES use in patients with 3 vessel disease results in about 3,600 premature deaths annually in the US.

In the end, the panel did recommend that a warning be added to the DES labels stating that off-label use may increase the risk of thrombosis, myocardial infarction, and death, and several members recommended that a black box warning be added. However, Dr Brian Zuckerman, director of the FDA's division of cardiovascular devices, quickly quashed that idea, saying there would be no black box warning, according to MedPage Today on December 8, 2006.

But as usual, investigations have shown that the FDA was aware of the DES problems for years. Within 6 months of the approval of the first DES, the FDA had already identified 50 cases of allergic reactions and agency records show that a few months after the Cypher arrived on the market, the FDA received a cluster of sub-acute thrombosis reports and the FDA and J&J issued a letter notifying doctors of the initial reports in July 2003.

The Tarus was launched in March 2004, and on July 16, 2004, Boston announced a major recall of 85,000 of the devices after a death and serious injuries were linked to the DES, just two weeks after 200 were recalled following reports of malfunctions during implant procedures. At the time of the announcement, the company also said that it was recalling 11,000 bare metal stent systems, which the FDA found to be linked to two deaths and 25 serious injuries.

Two years later on October 23, 2006, Bloomberg reported that 2.9% of DES patients could develop clots within three years and said, "More than 4 million people have received such stents since 2001, which means clotting related to drug-coated devices may have caused as many as 20,000 heart attacks and 10,000 deaths worldwide."

The American College of Cardiology posted an editorial online by Dr Sanjay Kaul, director of the cardiology fellowship training program at Cedars-Sinai Medical Center and a colleague on October 11, 2006, that warned that blood clots in drug-coated stents may be causing an extra 2,160 deaths in the US alone each year.

The next month, on November 29, 2006 analysis by researchers at the Cleveland Clinic found the risk of blood clots was increased as much as 5-fold in patients who receive drug-coated stents compared to patients implanted with the old bare-metal stents.

"There are hundreds of thousands of Americans who are currently getting stents placed who do not need it as initial therapy," according to Dr Raymond Gibbons, professor of medicine at the Mayo Medical School and president of the American Heart Association, in a United Press International article.

In the March 28, 2007, Wall Street Journal Health Blog, Dr Andy Demajio wrote, "It has been distressing to see how interventional cardiologists have been happily stenting their patients to fatten their wallets."

"This immoral practice should come to a stop," he wrote. In May 2007, the Medicare Strike Force reported that one cardiologist had implanted 25 unnecessary stents in 2006 alone, with most procedures paid for by Medicare.

More News
Legal experts are predicting that future lawsuits filed against Boston and J&J may well include the names of cardiologists and hospitals that helped turn the stenting for profit business into a billion dollar industry. Being there is no way to reverse the stenting procedure, patients face a life-time of worry because a blot clot in a stent can cause a stroke or heart attack without warning at any time.

Lawsuits against the stent makers continue to mount. On December 6, 2007, 46-year-old Sean O'Shea, a man who had five stents implanted, announced a lawsuit against J&J, alleging the company failed to warn him about potential blood clotting complications associated with the stents.

"Had I known there would have been this many complications," he said in a news conference, "I would have chosen other options."

On July 30, 2007, the Zimmerman Reed law firm announced the filing of a lawsuit against J&J by a Minnesota man who suffered a heart attack as a result of a blood clot at the site of his Cypher implant. According to the press release, it is estimated that over 50,000 patients have been implanted with the Cypher stent.

If you or a loved one has suffered a heart attack or stroke after having a drug eluting stent implanted, please contact a lawyer involved in a possible [Drug Eluting Stents Lawsuit] who will review your case at no cost or obligation.
Request Legal Help Now