Bhagavan and Ila and the rest of their church group had been going to Ruby's Dineras regularly as they had been going to church. But when they questioned restaurant management about accommodating a disabled parishioner, they were asked to leave and refused all future service. That discrimination against the disabled, said Bhagavan, cannot be tolerated.

As part of their regular pre-church routine, a group from the congregation enjoys breakfast at Ruby's Diner before church. They also frequent that establishment several times a week in the evening. In fact, said Bhagavan, the minister eats there three-to-four times a week.

"We've been going there about ten years and have made a lot of friends," said Ila. "Because we're regulars, it's like a second family." 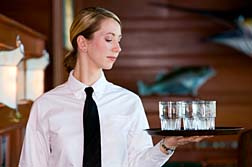 As one of their sisters in the congregation was living with an immune disorder and had been on chemotherapy for years, she couldn't be unnecessarily exposed to sick people, so typically, Ila or Bhagavan would call ahead and make sure there was a healthy waitress to serve them.

But on this particular day, their phone call was greeted with a new message: you are not welcome here anymore. It seems that earlier, a woman on oxygen had been served by a waitress who was coughing and whose nose was running, and a member of the congregation had called the health department to investigate.

"Then he said people with disabilities should stay home. To me, in my mind, that's when it became a national event. I thought that attitude was behind us," said Bhagavan. "He has been serving our needs for 12 years."

Bhagavan feels it's retribution for the call to the health department, which had advised Bhagavan there was nothing to report, that there was no sick staff.

More News
"He told me he couldn't run the restaurant if he obeyed all the health laws," said Bhagavan. The owner also told him that staff had been alerted that if a health inspector asked if their symptoms were due to illness, they were to say they had allergies.

Bhagavan and his group, this time including a physician and an attorney, showed up with two video cameras. They were refused service but peacefully yet firmly moved beyond the general manager and sat at a booth. They demanded service for 20 minutes but didn't get it, so they left.

One healthy member asked if he could be served but was told as long as he was with that group, no one would be served.

"I am not looking to make money," said Bhagavan, "but some sort of punitive damage is appropriate. This is a moral issue for me. This is critical. It's not just that I am embarrassed and humiliated. It's a moral and health issue that needs to be addressed."