Gender Discrimination is alleged by Female Ref against Religious School

An investigation in underway at a religious school near Topeka, KS after alleged discrimination was launched against a female referee at St. Mary's Academy twenty-five miles northwest of Topeka. The alleged incident occurred on February 2nd when allegedly school officials would not permit a female referee to call a high school basketball game. The female ref was allegedly stopped short on the court when she attempted to officiate over the game, which she had prior plans of officiating over.

The incident allegedly is that a St. Mary's Academy school official advised Michelle Campbell that she could not preside over boys in an authoritative position. The alleged reason given was because she is a woman, and this is allegedly against the belief system of the school. Two male referees accompanied Ms. Campbell off the court to show their support of her as a fellow referee. The State High School Activities Association is allegedly contemplating bringing action against St. Mary's. The school is under the jurisdiction of the Society of St. Pius X. The Society of St. Pius X is allegedly run by pre-modern Roman Catholic rules. 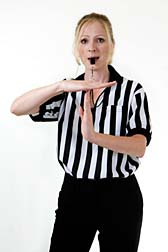 The executive director of the State High School Activities Association is allegedly checking to see if the school has a policy in place that forbids female referees from assisting with boys' basketball games. If the school in fact does have such a policy in place, allegedly the school could be stricken from participation in games with over three hundred schools that are Association members. The Associated Press allegedly tried to make contact with St. Mary's Academy officials, but comment was not given.

More News
St. Mary's Academy is in the ten percent of the Association's schools that aren't full fledged members. The school usually only competes in a couple of games per season. St. Mary's allegedly has no additional games set up for this school season. If the school is stricken from the list of approved schools it may still compete with schools not affiliated with the Association's more than three hundred members. The Association's executive director sent a letter via mail the day of the alleged incident, but comment has yet to be received from the school's principal. The executive director for the association allegedly stated that this is the first incident he has encountered of this nature. He has never dealt with any school that refused to allow a referee to oversee a game due to their sex.

Ms. Campbell and the two referees that offered their support to her were allegedly unavailable for comment on the matter as well. The Association is attempting to deal with the situation in a fair and equitable way for all parties involved. This is why the Association is doing its best to gather as many details and viable information as possible about the alleged incident. However, they allegedly will not tolerate discrimination against referees for race or gender who are considered officials.