In compensation for a cruel example of hate and discrimination, a jury on October 31st awarded a York, Pennsylvania man $11 million in damages over a protest that happened at his son's funeral. The memory of Marine Lance Cpl. Matthew Snyder, who lost his life in Iraq fighting for his country, was sullied and an otherwise touching family gathering ruined when the Westboro Baptist Church in Kansas allowed a protest by church members, and members of the commnity at large, which railed against the war and homosexuals.

The award was levied against the Topeka-based fundamentalist church and three of its leaders. Albert Snyder, the boy's father, was awarded $2.9 million in compensatory damages, and $8 million in punative damages. 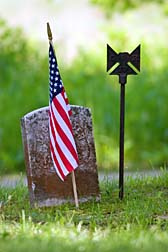 The fundamentalist members of Westboro believe that the war in Iraq is punishment by God for the nation's tolerance of homsexuality. The day of the funeral last year, protestors gathered outside the church building with placards emblazened with extreme language and 'unkind' words. Snyder, the grieving father, claims not to have seen the contents of the placards the day of the funeral, but indicates that others did—in the process, ruining a solemn family observance for a fallen soldier having died proudly in the line of duty.

There is no suggestion as to the young man's own sexual orientation, nor is it at issue here.

The issue, according to Snyder as he appeared on the 'Today' show with Matt Lauer on NBC, is the right to free speech and protest under the First Ammendment, but with defference to moral responsibility.

In its verdict favoring Snyder, the jury agreed.

More News
The lawsuit is precedent-setting, and considered the first of its kind as Snyder challenged the First Ammendment in such fashion, on behalf of a fallen serviceman. Various states have already passed laws governing funeral protests, and a law prohibiting similiar actions at federal cemetaries has been passed by Congress.

Snyder told a nationwide audience on the Today show, the day after the verdict, that he hoped other families and citizens would take the cue from his lawsuit and litigate for similar invasions of privacy and intent to inflict emotional distress.

The church and its leaders, founder Fred Phelps and his daughters Shirley Phelps-Roper and Rebekah Phelps-Davis, have indicated they will appeal. It is unclear if Snyder will be successful in collecting the award, as the financial assets of the church, its directors and the Westboro Church community, are in some dispute.

However, one of the lawyers for the plaintiff, Sean Summers, indicated he would work tirelessly to seek payment of the award.

If you or a loved one has been harmed by a civil rights violation, please contact a lawyer involved in a possible [Lawsuit] who will review your case at no cost or obligation.
Request Legal Help Now