Defective Products: The Exploding Gas Can

It is something that hundreds of thousands of Americans have in their garage, basement or garden shed. A polyethylene gas can. Used correctly, with care taken to mitigate all risk factors, a gas can should not pose defective product personal injury. But life happens, and in the case of the majority of consumer-grade gasoline cans on the market, there is no basic safety mechanism that would prevent defective products injury attorneys from being as busy as they are. 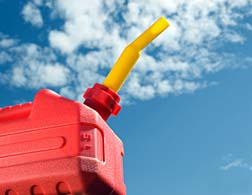 That's because most consumer-grade gasoline cans are manufactured without a basic safety feature that, some say, would cost literally pennies to include: a flame arrester.
The latter is a small piece of wire mesh that is placed inside the spout of a gas can. The holes are narrow, extremely close together—large enough to allow fluid to flow through, but narrow enough to ward against the migration of vapors.

Vapors can be just as flammable, as the gasoline itself.

Landon Beadore knows that, all too well. Profiled on a recent episode of 'Dan Rather Reports' on HDNET, the eight-year-old boy had simply carried some items down to the basement of the family home, when he accidentally knocked over a gas can containing gasoline. Although no fluid spilled out, the vapors flowed unfettered from a spout not equipped with a flame arrester. The vapors traveled across the concrete floor to the pilot light of the gas-fired water heater. Once ignited, the vapor carried the flame back to the filled can, which exploded beside Landon, immolating the boy. He survived, but was severely burned.

There have been other accidents involving exploding gas cans, with sometimes-tragic results. And true, some of those accidents have been caused by individuals with no sense of just how gasoline, or the vapors from gasoline react in the presence of an open flame. For example, most people could tell you that you don't pour gas onto a burning, or even smoldering fire. Nor do you smoke while you're filling up the gas tank of your car. Vapors can ignite, and the consumer is just asking for trouble.

However, critics of the gas container industry claim that the addition of a tiny, inexpensive flame arrester to consumer gas cans would go a long way to minimizing death and injury.

In his report for HDNET, former CBS News anchor Dan Rather referenced a 1973 entry in Consumer Reports magazine:

"Should fumes outside the gas can ignite as you pour or fill, a flashback fire is possible that could ignite the contents of the can itself. such accidents can be prevented by a flame
arrester, which we think should be legally required in all openings like these."

Eight years later the magazine returned to the subject: "Pouring gasoline in the presence of even the smallest open flame is asking for trouble. Should the gasoline ignite, flames could race up the stream of fuel and into the container, causing a devastating explosion. a flame arrester - a fine wire mesh in the pour opening – could prevent
the hazard."

Nothing, it is alleged, was ever done.

Part of the focus of the gas can issue is on Wal-Mart, the largest corporation in the United States and a company that sells a lot of gas cans—specifically, polyurethane cans made by Blitz USA Inc of Miami, Oklahoma. The Blitz consumer-grade cans sold by Wal-Mart do not have a flame arrester—and as such, critics of the cans consider them unsafe.

The manufacturer denies this charge, and maintains that accidents happen as the result of improper use of the can. The cans are also manufactured according to existing codes and regulations.

Wal-Mart is said to have claimed it would never knowingly sell a product to the consumer that was unsafe. However, according to video obtained by an attorney representing a client injured by an exploding gas can and aired on HDNET, it appears as if Wal-Mart did—if the comments of Wal-Mart executives articulated at corporate meetings are any indication. While there doesn't appear to be any reference to the possibility that the product is unsafe, there were comments made that appeared to infer that Wal-Mart knew the cans could explode.

Given that, critics wonder why Wal-Mart, with it's clout as the largest retailer in America, has not requested a design change from the manufacturer, as it has in the past. Prior to the current controversy, Wal-Mart took a bevy of consumer complaints to Blitz over its' pull-and-pour' spouts, which consumers complained were leaving them with gas residue all over their hands. Wal-Mart is said to have asked for a design change, and got it.

However, it appears that no such design change has been requested with regard to the flame arrester issue. True, there are professional-grade gas cans on the market that are considered the safest in the industry, and are designed for transporting and storing all types of flammable liquid. They come equipped with both a flame arrester and a spring-activated cap, which closes automatically and ensures that vapors don't escape, or oxygen doesn't migrate into the can to mix with the vapors.

More DEFECTIVE PRODUCTS News
These cans, which are said to cost more than 50 dollars, are admittedly expensive and would never be accepted by the consumer market at that price. However, it has been reported that the lion's share of the extra cost is generated by the complexity of the spring-cap. The actual flame arrester, at worst, could add an extra dollar to the cost of a gas can. Others suggests it could be done for as little as a few cents.

One could speculate that the reason why this isn't happening is because there are few, if any, complaints about the cans. One lawyer says that manufacturers of gas cans are not required to report complaints, or incidents, to government. Thus, there is no data. And you only ever hear about the issue when there is a fire, or an explosion.

That doesn't happen often. However, critics point out that any gas can without a flame arrester is a ticking time bomb.

And no one, it seems, is doing anything about it…

If you have suffered losses in this case, please send your complaint to a lawyer who will review your possible [Defective Products Lawsuit] at no cost or obligation.
Request Legal Help Now