You can see the advertisements on television all the time—women running their fingers through their hair, happy because they have dyed their hair to a "brilliant" color. But what happens if the hair dye is a defective product? After all, hair dye contains chemicals that come in close contact not only with your scalp, but with your eyes, nose and mouth, creating the potential for a serious personal injury. Some women say they suffered severe burns after using hair products, including dyes and relaxers. 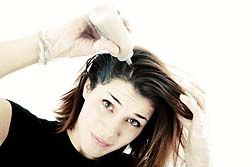 Alice, from New York, writes that she suffered serious injury within an hour of coloring her hair. Her injuries included, "Scalp burns, blotches on [my] face, scabs on [my] scalp, severe burning, incessant itching, facial burns [and] scalp sores."

Problems with hair dyes are not new but they can be traumatic. Joyce, from Indiana, writes, "Upon dying [my] hair, the scalp was burnt and bleeding, and the face, eyes and neck swelled up." Furthermore, she writes that she suffered burns on her neck and shoulders, her eyes swelled shut and blood coming from her scalp, resulting in 2 trips to the ER.

According to the FDA, some problems reported from hair dyes include hair loss, burning, redness, itchy or raw skin, swelling in the face and trouble breathing. Sometimes, the issue is an allergic reaction, and the FDA warns that such a reaction can occur even after years of using a hair dye product.

Some lawsuits have been filed against hair dye makers, alleging their product caused women to permanently lose their hair. In 2006, a lawsuit was filed against Procter & Gamble, alleging that Clairol "Nice 'n Easy" hair dye left the plaintiff with chemical burns on her scalp and caused her hair to fall out.

Hair dye chemical burns do not just happen at home. In fact, lawsuits have been filed against salons alleging that clients suffered chemical burns during hair dye treatments. In 2008, a woman filed a $12,000 lawsuit, alleging she suffered a severe chemical burn to her scalp. Her lawsuit seeks expenses for medical care as well as damages for physical and mental pain and suffering.

In fact, any chemicals around the scalp and face can cause damage, not just hair dyes. Some women use hair relaxers, to straighten their hair. Unfortunately, this can also result in injury as one woman found out. Cloria writes that after putting the relaxer on her hair, her head became hot. She had used the product before and says she had never experienced this. "My hair started coming out, I was devastated."

More DEFECTIVE PRODUCT News
An article in the FDA's Consumer magazine notes that hair straighteners and hair dyes are among the agency's Office of Cosmetics and Colors top consumer complaint areas. Although some complaints are caused by misuse of the product, others may be related to the product itself, and reactions vary from hair breakage to emergency room visits. According to the FDA article, there have been cases where products were labeled as "chemical free" when they actually contained ingredients that most people would consider "chemicals." In those cases, the products were eventually removed from the market or had their labels changed.

Chemical burns can be incredibly painful and can have severe consequences for victims. They can take a long time to heal, putting patients at risk for infections. The recovery can be expensive, requiring various medicines, including steroids, to heal the burns and creams to stop the pain. Of course, there is also the emotional impact associated with such chemical burns. The scarring of the head and face can be emotionally traumatic for a person, leading to depression and anxiety.

Posted by
Kimberly Bellucci
on September 23, 2019
bought this product from Walgreens tonight. I have used this product for 3 plus years.
I am OCD and ensured all my products were in the box before even using it. Before using it today, I ensured my hair wasn't washed for 2 days to ensure I built up more natural oils since I was bleaching it. While using this product, I did notice it was a tad more annoying on my scalp than normal. It was a sutle difference but I contributed that to maybe it's because I haven't did touchups in awhile.
About 7 mins in to applying it it had really started to irritate me and I immediately removed the product cause then I knew that was very abnormal. Once I got the product off, I have come to realize that product so damaged my hair.my hair feels like hay. It's fried and my hair has broken near my ears on both sides half way down. My scalp is extremely sensitive right now, almost feels like a sunburn but in my head.
I had hair falling out too. Like I'm so upset..
my ears are still very red, scalp is very sensitive and I've lost a lot of hair ..it's obvious by the lack of hair in many pics. The company discontinued it!!! I have burns on scalp and ears now too...

Posted by
Brittany Boswell
on September 25, 2012
My name is Brittany Boswell. I am 22 years old and hair dye products have ruined my hair and scalp. I started dying by hair dark a year and a half ago and then started experiencing terrible side effects. My scalp burning, a severe condition of itching and flakes appeared. My scalp was completely dry. So over the past year I have been to doctors and they have done a serious work up of blood work to see if this was caused by something internally. All the blood work was negative. 3 nights ago I dyed my hair and I woke up with an infected and inflammed scalp. I am on medication to control the infection and inflammation. My scalp burns and has fluids coming from it as well.