Kids Play Shouldn't Be This Dangerous

The number of children injured or killed by dangerous and defective children's products has more than doubled in the past five years. Toys head up the list of culprits, followed by furniture and arts and crafts supplies.

Already for the month of March, 10 out of 23 products recalled jointly by the Consumer Product Safety Commission and manufacturers, were destined for kids. Among them were girl's hooded sweatshirts (Reblette of Los Angeles and Urgent Gear), baby rattles (Infantino), infant sling carriers (Ellaroo), toy sundae sets (Battat Play Wonder) and magnetic toys. 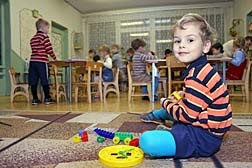 The extremely popular magnetic action figures and toy sets are repeat offenders and back in the news. Last week, in its third recall in as many years, MEGA Brand America, Inc. voluntarily recalled 1.1 million of its Magtastik and Magnetix Jr. Pre-school Magnetic Toys and about 1.3 MagnaMan Magnetic Toy Figures.

A week earlier, Battat Inc. followed up a January 2008 recall with another on March 13 for its Magnabild Magnetic Building Toys or Sets, after 16 reports of magnets detaching from the sets were reported.

If a child ingests more than one of these powerful magnets, the magnets can attract each other through soft tissue and cause intestinal perforations and fatal blockages. Last year, one child died and 27 others suffered severe intestinal injuries after swallowing magnets.

The non-profit organization, Kids In Danger (KID), has been tracking alarming trends in injuries and recalls since 2001. On the average, they have charted a steady rate of one to two recalls per month--a surprising fact for parents, who report only hearing of four or five a year. The year 2007 was dubbed Year of the Recall, and terrified consumers and industry alike. Of 448 recalls that year, 52 percent were for children's products, causing 676 injuries, up a whooping 374 percent from the previous year.

University of Chicago professors Linda Ginzel and Boaz Keysar founded Kids In Danger in 1998 after their 16-month-old son Danny died in a faulty portable crib.

KID released a study in February 2008 which examined the recall process of 40 items in the past five years for risk of burn and fires. The report's author, Emma Rosenberg, commented, "The fact that 40 products were recalled in the last year, compared to 42 products in the ten years before that means that somewhere along the way, children's product safety is getting sacrificed."

Burns and fires are responsible for 60 percent of playroom injuries. And not just from new, high tech toys. A five- year-old was so severely burned by the hot surface of the old time favorite, Easy Bake Oven, that her fingers had to be amputated. And Fisher-Price's Crib Mobile Toy dripped battery acid, chemically burning 7 kids.

These days, the nursery may rival the kitchen as the most dangerous room in the house. In a February 2008 Consumer Affairs report, Safe Kids USA expressed particular concern over cribs, playpens, bassinets and play yards, pointing them out as environments where parents might leave a child unsupervised for long periods of time. Four infants died before over a million cribs manufactured by Simplicity and Graco were recalled last year, making it the largest crib recall in history.

Yet the defect in the cribs was old news to Simplicity and CPSC. A Chicago Tribune investigation charges that both parties were aware at least two years prior that the faulty hardware and improper installation left babies vulnerable to suffocating.

Up to now, manufacturers are not obliged to test items before putting them on the market and if a recall does occur, it is voluntarily reported to the CPSC who in turn alerts the media. But no other action has been required to make sure the product use is discontinued and doesn't circle back to homes, child care centers and on eBay.

But on March 6, the Senate passed a tough new consumer safety bill that overhauls the CPSC. The Reform Act would make it harder for companies to dodge the safety issue in manufacturing dangerous products. Among its long list of new provisions, it would require third-party certification on all children's products entering the U.S. This defers the expensive testing process onto the manufacturer rather than the taxpayer. It will also protect whistleblowers on both the importer and manufacturer's side so that infringements can be reported without fear of reprisal.

More News
On a state level, similar action is under way. As of the end of January, a Children's Product Safety Act is being processed in the states of Illinois, Missouri, Michigan, Louisiana, Arkansas, Rhode Island, New Jersey, and Vermont with Oregon and Connecticut drafting on a similar bill.

Like the Senate bill, it too bans the resale of all dangerous and recalled items, be they toys or clothing, and require retailers to track and report to the Department of Consumer Protection how the items were disposed.

It will take some time for the new vigilance to allow parents, caregivers and other consumers to feel they are making safe choices. If stores won't voluntarily post a list of recalls and known dangerous products, the onus falls on the parents to regularly check the consumer websites for these, unfortunately, almost daily announcements, and for potential lawsuits.
READ ABOUT THIS LAWSUIT