It has been a hectic spring for the U.S. Consumer Product Safety Commission (CPSC), the leading government organization tasked with rooting out defective products. The CPSC endured a tumultuous leadership hunt but still managed to remain focused on product safety issues.

Founded in 1972, the CPSC's self-proclaimed mission is to "protect the public from unreasonable risks of serious injury or death from more than 15,000 types of consumer products" ranging from "automatic-drip coffee makers to toys to lawn mowers." 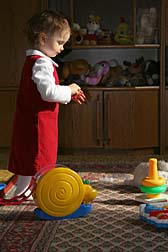 The CPSC performs a vital task: according to the Commission, "deaths, injuries and property damage from consumer product incidents cost [the United States] more than $700 billion annually."

In March 2007, consumer advocacy groups were alarmed when President George W. Bush selected Michael Baroody to chair the CPSC. Baroody had been working as executive vice-president of the 14,000-member National Association of Manufacturers (NAM).

"Mr. Baroody is a poor choice to head an agency responsible for overseeing the safety of children's toys, clothing and nursery products. The well-being of our kids is too important to turn it over to someone who has always taken the industry side where safety is concerned," sniffed Sally Greenberg, senior product safety counsel for the Consumers Union, in an April 26/2007 coalition press release.

As vice-president at NAM, Baroody "has overseen efforts to dilute safety proposals ... and to weaken the very agency he is now nominated to head," continued the press release.

Baroody was accused of opposing a CPSC proposal to improve the safety standards of baby walkers and a measure designed to make it easier for consumers to find out about recalls of potentially hazardous children's products.

Democrats in Congress joined in the chorus of groups criticizing Baroody.

These complaints had an impact—in late May 2007, Baroody withdrew his nomination. The White House accepted his withdrawal.

In spite of these leadership problems, the CPSC continues to trudge along; on May 30, for example, the Commission released a flurry of recall notices for defective products.

One recall focused on a swing sold by toy giant Fisher-Price of East Aurora, NY. Made in China and sold for roughly $65 at department and toy stores, the swing was available from November 2006 through May 2007.

More News
"Infants can shift to one side of the swing and become caught in the frame and seat, posing an entrapment hazard," stated a CPSC press release. "Fisher-Price has received 60 reports of infants becoming entrapped, resulting in cuts, bumps, bruises and red-marks."

Another product recalled on May 30 was a drum kit for kids made by The Boyds Collection Ltd., of McSherrystown, PA. About 4,500 kits were sold from June 2005 to April 2007. The CPSC issued a recall notice after determining that the drums—which were also made in China—contained potentially dangerous paint.

"The red paint on the drums contains high levels of lead," reported the CPSC. "Lead is toxic if digested by young children and can cause adverse health effects."

While a product recall is never good news, it's reassuring to know the CPSC is still on the job despite shake-ups at the top.
READ ABOUT THIS LAWSUIT

If you have been injured using a defective product, please contact a [Defective Product Lawyer] who will review your case at no cost or obligation.
Request Legal Help Now