People these days who are just hanging on by their teeth economically could be forgiven in their vilifying of people like Milton Retana for ripping innocent people off through alleged Ponzi fraud. This time, the Ponzi scheme fraud involved a real estate broker who allegedly defrauded thousands of people out of millions of dollars. Sadly such Ponzi schemes, which have been around since the 1920s, play no favorites and show no mercy for people who are hurting. 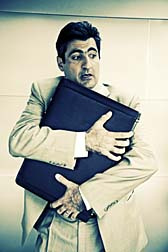 Last week it was a Ponzi investment fraudster in Manhattan. This week it's a real estate broker in Los Angeles. Milton Retana, 43, faces eight counts of fraud and a charge of making false statements to federal agents after allegedly jilting investors out of $62 million.

According to a written statement issued by the US Attorney's office Retana utilized seminars, and advertised in Spanish-language news media to get the word out.

Apparently the word got out to the tune of millions of dollars. Trouble is, the investments Retana is alleged to have made were few and far between. In fact, prosecutors allege that between 2006 and this past October Retana made only a handful of actual investments. The remainder of the money, it is alleged, went into his pocket and that of Best Diamond Funding.

It may have gone into a religious bookstore owned by Retana's wife, although that allegation has not been made. However, the store has a role to play in the ultimate discovery of the Ponzi scheme after investigators with the Federal Bureau of Investigation (FBI) and the US Postal Inspection Service seized a total of $4 million in cash from Best Diamond Funding's offices, as well as the bookstore owned by Mrs. Retana.

That $4 million was contributed by investors mistakenly thinking their money had been duly invested when, allegedly, it was not.

The alleged scam was discovered in October. Retana, a native of San Salvador now living in Norwalk, appeared before a federal magistrate Wednesday to answer to the charges.

Retana will also have to answer to his conscience, given his alleged greed and misguided scheme that captured the interest of investors desperate to reverse stock market losses, or to improve investments in an effort to stave off the foreclosure of a home.

More PONZI SCHEME News
In so doing Retana, and others who commit Ponzi scheme fraud, prey upon the panic of a society riddled with bad news and hard luck. Investors have watched helplessly as their portfolios have tanked, their jobs disappear, their chance for a comfortable retirement virtually dashed overnight. People have lost their homes, and those who have managed to remain have seen the market value of their properties sink like a stone, deepening their woes.

Along comes someone like Retana, with alleged Ponzi schemes dressed up as legitimate investment opportunities that promise big returns with low risk. At any other time in the nation's economic history investors might tell someone like Milton Retana to take a hike. But times are hard, and poised for emotionally taxed investors ripe for Ponzi scheme fraud. Sadly, instead of a rescue, such Ponzi fraud could be the final nail in their fiscal coffin.

If you have suffered losses in this case, please send your complaint to a lawyer who will review your possible [Ponzi Scheme Lawsuit] at no cost or obligation.
Request Legal Help Now