Medicare Fraud in California Alleged to Have Cost Millions

In an era where many Americans do not have access to the healthcare they need, homeless persons and street people have been benefiting from healthcare they either didn't need or didn't want in an effort to bilk Medicare, Medicaid and Medi-Cal out of millions. It is one of the most sickening cases yet of Medicare fraud. 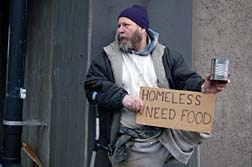 Earlier this month it came to light that three southern California hospitals were potentially bilking the system. A raid two days ago on the three premises by the Federal Bureau of Investigation (FBI) confirmed that all is not well with a health care system that somehow allows such fraud to exist, and three health centers in particular that suggests the audacity to allegedly profit from a population in no position to defend itself, let alone benefit from the alleged 'care.'

Three privately owned medical centers, and a storefront recruitment outfit is implicated in the alleged scheme.

Here's how it worked.

A street recruiter, working out of a storefront location in the heart of skid row, allegedly rounded up street people with promises of 'incentives' ranging from a couple of bucks to a pack of cigarettes, and provided them to one of three medical centers, complete with fake diagnoses.

Recruiters "were looking for someone who was sick or immobile," said an unamed source close to the investigation, who spoke to the LA Times. "Someone who was in need of money, who was down and out, sleeping on the street, with nowhere to go."

While it is true that most of the recruits were not well to begin with, and certainly lived a lifestyle that few would consider anywhere close to healthy, it was typical for a recruit to be treated for medical conditions that did not exist, allowing the hospital involved to allegedly bill the taxpayer-funded Medicare and Medicaid system for care, procedures and drugs that were not necessary—and in some cases, harmful to the patient.

It is alleged that one street person was provided with a nitroglycerin patch for a cardiopulmonary condition that didn't exist. The inappropriate treatment caused what was described as a precipitious drop in her blood pressure, and ultimately put her in peril.

Participants in the alleged scheme were recruited regardless of their health, symptoms, or mental stability. The unnamed source told the LA Times that recruiters didn't care if a prospect was a drug user, or had underlying psychiatric issues. They were all ripe for the picking. One recruit, identified in a lawsuit as 'Recruit X,' is said to have sufferred from a mental disorder and was allegedly sent by the skid row-based Assessment Center to all three of the participating medical centers for treatment.

Thus, all three centers would be in a posiiton to allegedly bill Medicaid, Medicare and Medi-Cal for diagnoses, treatmeents and prodecures that either weren't warranted, sought, or didn't exist—if the diagnoses or treatment were even given at all.

Once the alleged treatments were complete, the recruits were either left to leave under their own power, or were driven back to skid row in an ambulance.

Ironically it was the sight of an ambulance dropping off five street people to the heart of skid row two years ago, that tipped off authorities and served as the geneis of the investigation.

Implicated in the alleged scheme are City of Angels Medical Center, Los Angeles Metropolitan Medical Center, and Tustin Hospital and Medical Center. An owner and the Chief Executive of City of Angels, Dr. Rudra Sabaratnam, was arrested on federal charges as was an alleged patient recruiter, Estill Mitts. A 21-count grand jury indictment accuses the pair of healthcare fraud and receiving illegal kickbacks.

Street recruiters were alleged to receive $40 for each homeless recruit with Medicare eligibility, and $20 for each recruit with Medi-Cal benefits. It is further alleged that Mitts' recruitment group was paid $20,000 per month each from Metropolitan Medical Centrer and Tustin, whereas City of Angels is alleged to have paid between $400 and $1,000 per week to the Assessment Centre.

More FRAUD News
It has been alleged that Tustin was guarenteed 40 to 50 patients per month, and that the center's Chief Financial Officer, Vincent Rubio, allegedly received $3,500 per month in kickback payments to ensure that Tustin continued to accept patients referred by the alleged scheme.

Those close to the investigation say that doctors often did not see their 'patients' until shortly after discharge, and that the alleged fraud could have cost the taxpayer-supported health care program $16 million or more. It has been alleged that the Assessment Center generated $11 million in improper payments, while City of Angels is alleged to have collected $5 million in federal health care reimbursements.

The owners of Los Angeles Metropolitan Medical Center and Tustin Hospital and Medical Center in Orange County, Pacific Health Corp., said in a statement that it had cooperated with authorities and had taken the position that it would be cleared of any wrongdoing.