Just as America's 44th President was coming into office and promising swift action to bail out the ailing economy—including the nation's banking industry—it was revealed that executives at the failed Merrill Lynch were handed fat bonus checks just days before the floundering firm was acquired by Bank of America on January 1st. Some are alleging financial fraud. 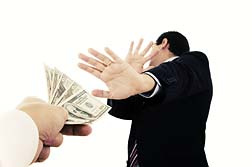 A total of $3.6 billion in bonus money was paid out to a collection of executives—many of them accused of contributing to the failing fortunes of Merrill Lynch. Reports indicate that four executives alone received bonus payments totaling $121 million. Beyond those 4, nearly 700 Merrill Lynch employees took home at least $1 million each in bonus payments.

It should be noted that the advancement of bonuses is often a contractual obligation—especially for top executives.

Still, there are questions. Even though normal practice in the banking industry sees bonus payments going out during the first quarter of the year, such a payment timeline would not have worked for Merrill Lynch, which was due to be swallowed by Bank of America January 1st. Thus, any bonus payments by Merrill Lynch, to Merrill Lynch executives and employees would have to happen prior to the acquisition.

However, New York Attorney General Andrew Cuomo requested information on the expected Merrill Lynch bonus payouts October 29th of last year, but received no details on either the payment criteria to be used, or the expected size of the bonus pool.

Considering the fact that Merrill Lynch reported a fourth-quarter loss of $15 billion just before its acquisition by Bank of America, it is curious that the bonus pool would be so high—and especially for those individuals at the top who may have had a hand in the failing fortunes of the company.

Merrill Lynch was also one of hardest-hit by the failing economy.

A spokesperson for Bank of America made the point that as an independent company, Merrill Lynch board of directors had absolute authority over how much to pay its employees in bonus money. "Bank of America did urge the bonuses be reduced," said Scott Silvestri in a statement, "including those at the high end. Although we had a right of consultation, it was their ultimate decision to make. In addition, a substantial amount of the Merrill bonuses were contractually guaranteed."

It should be noted here that John Thain, the former CEO of Merrill Lynch, did not accept a bonus of any kind for 2008 (his salary for that year was not disclosed). Four other top executives of the former banking powerhouse, including its COO, CFO, its president of global wealth management and the company's general counsel did not take home bonuses.

However, at least 704 other people did, totalling a staggering $3.6 billion.

Bank of America chose a more austere route. Their top executives received no bonus money for 2008, and the next level of executives saw their bonus pool slashed by 80 percent.

Ironically, Bank of America required an additional $20 billion from the US government, funds needed to offset the significant losses it was absorbing from the Merrill Lynch acquistion. Presumably, given a fourth-quarter loss of some $15 billion, a bonus bill of $3.6 billion would only serve to exsacerbate those losses.

The payment of bonuses is standard practice at the executive level—and it is assumed bonus payments that were contractually required were moved up to the end of the previous year, given the pending acquisition of Merrill Lynch by Bank of America January 1st.

However, what seems to have everyone's nose out of joint is why the bonus pool was so large given the huge losses incurred by Merrill Lynch. And why was the information witheld from the New York Attorney General's office, when the informaiton was requested up to 2 months prior to the bonus payments being made?

More FINANCIAL FRAUD News
Bank of America Chief Executive Ken Lewis, in testimony before a Congressional Committee (required of banks that received federal money), said that he had little involvement in the decisions made by Merrill Lynch with regard to the payouts.

It is presumed those urgings included a reduction in the size of the bonus pool.

If you have suffered losses in this case, please send your complaint to a lawyer who will review your possible [Financial Fraud Lawsuit] at no cost or obligation.
Request Legal Help Now