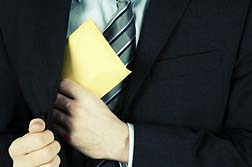 Arjmand owns the Gateway Fashion Mall in Bismark, as well as the Woodland and County Fair Fashion Mall, both located in California.
The businessman is reportedly facing financial fraud charges and is accused of insurance fraud, racketeering and bilking tenants at his three malls, California's Daily Democrat reports.

More FRAUD News
Arjmand allegedly committed insurance fraud with his business associates by making false insurance claims on inflated damage reports as well as on invoices for work that was never performed at the California properties.

The Bismark financial fraud lawsuit states that Arjmand allegedly charged Gateway Fashion Mall tenants extra for maintenance beyond what was actually done and pocketed the money in the process.

Arjmand is also being countersued by the Fireman's Fund Insurance Company, American Insurance Company and National Surety Corporation, after he reportedly sued them for denying insurance claims on his properties in California.

Posted by
David Davila
on November 16, 2015
Well, well it has been 5 years, and the insurance companies did successfully sueand collect on the paid out claims
Posted by
raymond arjmand
on February 24, 2013
these statments are completely false and the allegations never proven and had no merit.contrary if you read bismarck tribune dated feb.12.13 case was dismissed and owner and gateway mall obtained judgement against Jason fettig and his parteners $795,000..and third partener(Matt Hill)paid $25,000
to gateway mall.therefore statements were fabricated and incorrect..
and it was all orchestrated in an efforts not to pay rents and
simply breach the leases with the mall .But at the end they could not get away with it.David Davila is a liar,dishonest
individual ,he had affair with married woman (his empolyee)
and mall obtained judgement against tenant in amount of
$11,500.for breach of the lease.

Posted by
Gateway
on June 26, 2012
I know David Davila very well. Mr. Davila is not an engineer of any kind, he has no licenses of any kind to be an engineer. Mr. Davila worked for the border patrol in Texas and was fired. Mr. Davila was leasing a store form the mall and stayed in a local hotel near the mall.
Posted by
David Davila
on October 12, 2011
I was the environmrntal engineer there'at the gteway Mall, I know the truth , I was fired and not paid for all of my work because i wouod not lie. And he shut down my restraruant the Original Austins, after i had alreay paid the insurance and did the code repairs to scope, and ramond shut it down as retalaliation. He kept all my equmnet and upgrades.
he is a crook