Consumer fraud is rampant in this country, and will continue to be so as long as people are too busy, too distracted or perhaps too naïve to do anything about it. And as morally wrong as it is, the pursuit of the almighty buck takes no prisoners when it comes to moral fortitude. If you think you can get away with it you do—especially if the penalty if you are caught, is less than the amount you make with the fraud. Consumer protection is dependent on the consumer fraud act, but also on the willingness of Americans to fight back.

These are tough times, after all. No one has a spare dollar to throw around at the behest of fraud artists. Thus it is so unfair when a teenager with her first debit card is tricked into buying magazines she will never read, or an elderly patron is allowed to continue paying for a service she never uses. 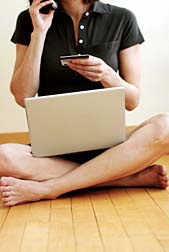 The teen years are a magical time in ones' life—a time of firsts, and many discoveries. Sadly, there is also the discovery that things are not always as they seem, and it is so easy to be sucked into something when the phone rings while you're holding your brand-new debit card, and it's an unscrupulous telemarketer at the other end of the line.

Sixty bucks for a year's worth of magazines seemed like a bargain, and the teen jumped at the opportunity. What teen doesn't like a bed-full of teen 'zines spread around the comforte? However, consumer fraud came into play here. The telemarketing firm whose job it was to drum up business for their client publishers, allegedly failed to deliver on the titles the hapless teen was promised on the phone. The actual magazines that began arriving were not at all something she would be interested in.

Another consumer fraud shocker: she was led to believe the debit to her account would be a one-time fee of $60. She soon discovered that the debit was to happen every month, and would for the duration of the contract. The teen called the company to cancel, only to be told that she was not allowed to cancel, as the middlemen marketers had already paid the publishers, the magazines could not be cancelled, and 'we're sorry.' Well Mom is involved now, talking to the bank, and eventually to an attorney.

Phone Bills, but No Phone

William B. of Worthington, Ohio took over paying his elderly mother's bills after his father passed away, and was surprised to see a monthly bill from AT&T in the mix. That's because nearly 3 years prior, his parents had switched telephone services and no longer used AT&T. And yet the bills kept on coming and his poor mother, not knowing any better, continued to pay them.

This went on for 31 months. After catching the problem William, ever the good son, brought the consumer fraud matter immediately to the attention of AT&T and arranged for a refund check to be sent. The check arrived in due course, but only for about half the amount owing.

The reason? AT&T had a company policy whereas they would only adjust back to 18 months. For the remainder, William would have to go to arbitration to collect the remaining $511.54 in monies paid by his ageing parents in good faith to AT&T, for service they never used.

More CONSUMER FRAUD News
Thus far, William has not gone to arbitration. Many won't, given the perceived expenses, and the fuss. Perhaps that's why companies have such policies. Presumably, William has been waiting for AT&T to relent, but after 22 months the $511.54 is still outstanding.

It is not clear whether or not AT&T was properly notified of the change in service, which is usually done by the incoming telephone provider. Still, with no activity for 31 months, you would think that somebody at AT&T would have noticed. Apparently not. The corporate giant happily collected a couple of dozen dollars each month, paid by a frail senior for a service she thought she had cancelled.

As of today, AT&T has shown no intention of returning the $511.54 in fees collected for a service never provided.

Consumer fraud has many faces, but consumer protection usually has only two: the face of an angry, exploited consumer, and the determined countenance of his legal counsel in working the consumer fraud act in the pursuit of justice.