Consumer Fraud Goes Up in a Down Economy

You know what they say—what goes up must come down. And when the economy goes through a downturn, what tends to come up is consumer fraud. When the economy sours, scammers tend to redouble their efforts. The Consumer Fraud Act provides a level of consumer protection against fraud artists bent on taking advantage of you. 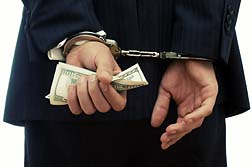 Since the economy went south last year, consumers report becoming inundated with everything from offers for extended auto warranties that afford little or no value, to a host of bogus products. Even consumers who have registered with do-not-call lists are getting hit with requests to invest in cures for the swine flu.

Many states are taking proactive measures to put a stop to this nonsense.

For example, New York Attorney General Andrew Cuomo has initiated a probe targeting so-called debt-settlement firms that advertise plans to re-negotiate debts and retire credit card debt. Given the current panic over the economy and consumer debt at record levels, the poor consumer is ripe for the picking by practitioners of consumer fraud.

Cuomo, who claims many of these plans are either flowed or misleading and often leave people worse off than they are, subpoenaed 14 companies in recent weeks.

Indiana Attorney General Greg Zoeller is waging his own campaign against fraudsters who rob well-meaning Americans of their consumer protection. Earlier this month Zoeller filed a lawsuit against two outfits and an individual for alleged violations of the state's do-not-call statutes.

Violations appear to be on the rise: During the first three months of the year, the Federal Trade Commission received 450,000 complaints about calls to people whose phone numbers are registered on the National Do Not Call Registry, according to spokeswoman Claudia Bourne Farrell. Complaints this year are expected to best last year's total of 1.8 million.

"Violations go up in a down economy," Zoeller says. The scammers he has cited in Indiana are accused of placing automated calls primarily to cell phones. Known as 'robo calls' or 'blasts,' they are activated thousands at a time and target consumers worried that the family car is about to give up the ghost or is poised to break down unexpectedly, leaving a struggling family with costly and unexpected repair bills.

Or, faced with the need to replace a vehicle consumers worry they would be unsuccessful in securing a car loan in this economy. Thus, along come the scammers—urging consumers to sign up for extensions to expired dealer, or manufacturer warranties in an effort to keep the old jalopy viable just a little longer.

And then there is downright fantasy: swine flu kits. Sniffing widespread panic over a potential swine flu pandemic, scammers have been placing calls to the most vulnerable consumers and urging them to buy 'mandatory swine flu kits,' which according to the telemarketers were required by the government.

More CONSUMER FRAUD News
Nothing is further from the truth. The office of the Attorney General in Indiana issued a statewide alert after consumers began reporting calls from telemarketers advising them to acquire the supposedly government-sanctioned kits.

According to Zoeller the scam artists target consumers who are most vulnerable—the elderly, and the poor. The latter don't have the money and the former are easily scared and coerced into doing something they really shouldn't be doing.

Such is the bastion, of the purveyors of consumer fraud. The Consumer Fraud Act affords a degree of consumer protection, but in the end it's buyer beware. And when the economy falters, consumer fraud artists ramp up their efforts. Don't fall for it. If you do get ripped off, fight back with the help of qualified legal counsel.