As the Congress continues to wrestle with undoubtedly the worst single economic crisis to hit the United States since the Great Depression, forgive Americans for thinking that they've been had. And now a proposed $700-plus billion bailout package aimed at rescuing the economy will be borne by the taxpayer, and push the national debt to a level unheard of in modern times.

And that bailout, it is presumed, can only hope to prevent the US economy from sliding into an unreachable abyss. At best, it will maintain the status quo. The ultimate result would be to restore the confidence in the markets needed to get them growing again. 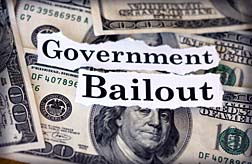 There is little doubt that something has to happen; lest the country find itself going somewhere it truly doesn't what to go. And if it doesn't enjoy the prospect of going down the bailout road, the alternative is beyond worse—it's unthinkable.

But where does that put Joe Investor in all of this? And what responsibility in terms of fiduciary duty does an enterprise have when it comes to governing its business dealings while keeping the best interests of its investors at heart?

Critics say that deregulation and greed caused this mess. Lending too much money to too many people who could ill afford to carry the loan if, and when the least bit of weakness, or change loomed across their path. Mortgages for massive houses with zero-down terms, along with extra money to buy that nice, new gas-guzzling SUV.

It was 15 years ago that a banker told this writer that banks were on a slippery slope, showering borrowers with more money than they asked for, or that they could afford to carry—all in an effort to get more loans on the books, to earn the fees and—perish the thought—wind up with a foreclosed house that the bank could turn around and sell, at substantial profit. That policy, it was suggested, was morally reprehensible, greedy and misguided, even if the industry managed to keep failures to a dull roar.

The prospect of massive failures, and the compounded pain, was unthinkable. But that's the road the banks were heading down.

No one stopped them. Not government, not regulation, and obviously not common sense. The need to demonstrate monster profit for the shareholder begat a Catch 22: the need for greed, to grow bigger and faster than the other guy got us into this mess, and in the deregulated environment of Wall Street there were no traffic cops.

What happens to an institution's fiduciary duty to its investors, and especially those participants in 401(k) retirement plans, the latter's health directly tied to the performance of the company? Too many times a corporation will invest 401(k) holdings in company stock, risking the value of the 401(k) if such lack of diversification results in dramatic drop in value, in step with a drop in stock from a troubled company under performing, or stricken with some other financial, or performance-related malady.

In this case, baskets of companies found themselves in trouble, posting record losses last year while reeling under the weight of hefty exposure from sub-prime mortgages, reduced to little more than worthless pieces of paper in the wake of record foreclosures and the tanking of real estate markets.

And the road to the American Dream is littered with victims: Bear Stearns; which was feeble and on the brink of collapse when it was absorbed, at substantial loss to shareholders, investors and 401(k) retirement savers alike.

Then there was Lehman Brothers, now gone. Merrill Lynch was sold off as a mere shadow of its former self. The near-collapse of AIG—even while maintaining health and viability in most of its far-reaching business sectors, such was its exposure to failing mortgage-backed securities as a counterparty that the one sector alone could have scuttled the company if a rescue package hadn't materialized.

And now the largest bank in America, Washington Mutual is no more—weakened and brittle, and swallowed with little resistance by a competitor.

Joe Investor, Joe Saver, and Joe Retiree trusted these guys to do the right thing, protect those investments and use prudence and common sense as their guide. It was anything but.

If, and when the massive, multi-billion-dollar rescue package from the Feds is hammered out and applied to the gasping economy, perhaps the resuscitation effort will breathe new life, and renewed confidence into Wall Street. We can only hope.

Once recovered, then what? Assuming the successful removal of the sub-prime mortgage tumor, the markets will recover and investors will, over time, see their investments come back, the lost time and chance for compounding interest notwithstanding.

More BANKRUPTCY News
But of the retirees, investors, and retirement savers who can't afford the time to wait for the markets to recover? What of Joe Retiree who does not have the luxury of time, or many years of gainful employment left to make up the loss? What if, for reasons of health they have to retire now, and up until last year had reasonable assurance that they had everything they needed? Now they have to keep working until they're 80? What if they can't?

At the end of the day, it's hard to say who will be left as targets for litigation. However, it's safe to assume that there will be hundreds of thousands of Americans who, like the rest of Americans are thankful that a major financial crisis could be averted. And, at the same time enraged that the greed, and mismanagement of others could have just cost them their retirement dream.

Don't be surprised if there is a parade of lawsuits citing fiduciary irresponsibility against institutions staved from extinction and given the chance to live to see another day.