Amazon Sued by Students Over Remote Deletion of Orwell's '1984'

A lawsuit launched by a Michigan teen against Amazon over the deletion of a book from his Kindle account reveals a remote deletion capability Amazon possesses that comes at the surprise of many. 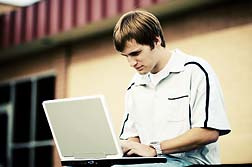 According to a Reuters account of July 31, Justin Gawronski attempted to access a collection of copious notes he had made in reference to George Orwell's '1984'—complete with links to passages of his copy of the book purchased through his Kindle account—when his digital copy vanished from his Kindle 2 reader.

According to Reuters the loss rendered all of his notes useless.

The issue, which has resulted in a lawsuit filed by two plaintiffs, reveals the capacity Amazon has to remotely delete digital material from private accounts without the express permission of the user.

Amazon may have the tools. However, the plaintiffs claim that Amazon should not have the power to do so.

"Amazon has no more right to delete e-books from consumers' Kindles and iPhones than it does to retrieve from its customers' homes paper books it sells and ships to consumers," according to the complaint.

The Kindle is an electronic reader that allows users to purchase and download content. Gawronski claimed that he purchased a digital copy of the book in June for $0.99.

The teen filed a complaint July 30 in US District Court in the Western District of Washington. He, together with a second plaintiff, holds that Amazon does not have the right to delete digital content and breached its own contract with its customers in doing so.

Kindle readers are made by Amazon.

More INTERNET/TECHNOLOGY News
According to Reuters, Amazon acknowledged earlier this month that it had deleted a collection of certain e-books from the Kindle readers of a number of owners, due to the addition of the books to the Amazon catalogue from a third party using the Amazon self-service platform.

It told Reuters that it accomplished the deletions after learning the third party involved did not have legal rights to the books.

A second plaintiff in the lawsuit over deleted notes, Antoine Bruguier of California, claims that Amazon failed to reveal why it deleted his copy of the same book—George Orwell's '1984'—and failed to provide a substitute version of the book when asked to do so.

Two weeks ago another lawsuit was filed against Amazon, after the owner of a Kindle reader sued Amazon claiming that the protective cover of the Kindle is capable of damaging the screen of the electronic reader. The lawsuit seeks class action status.

If you have suffered losses in this case, please send your complaint to a lawyer who will review your possible [Internet/Technology Lawsuit] at no cost or obligation.
Request Legal Help Now