Civil Rights case of He Said, She Said…in One Body?

Civil rights law exists to protect every American, regardless of race, creed or religion. Or gender, for that matter. In what is considered a landmark civil and human rights case in the State of Georgia, a transgender politician won her case against two disgruntled opponents who claimed Michelle Bruce's transgender status muddied the political waters and misled voters. Bruce counters that it is a victory for civil human rights. 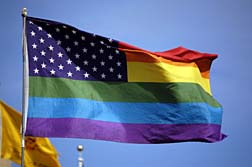 Here's the story. Michelle Bruce, an admitted transgender who has never identified whether or not she has undergone surgery to make her transgender complete, captured one of four municipal council seats in Riverdale, Georgia in 2003. She ran unopposed that time, but last year faced three opponents for re-election, and Bruce failed to capture a sufficient number of votes to avoid a run-off against the second-place candidate, identified as Wayne Hall.

To complicate matters even further, third-place finisher Georgia Fuller, together with a candidate in another race entirely, filed a lawsuit after the primary, alleging that Bruce misled the electorate. The litigants identified Bruce as 'Michael' in the lawsuit, and sought to have the results of the election overturned, in favor of having a new election.

On October 6th the Georgia Supreme Court released a unanimous civil human rights ruling finding that the plaintiffs failed to produce any evidence of fraud, misconduct or illegal action resulting from the allegation that Bruce misled the electorate by identifying herself as female. The Court concluded that "none of these alleged irregularities is specific enough to cast doubts" on the election.

"This is a great victory for me and anyone who believes in equality," Bruce said in a statement to the Associated Press. "It gives me hope that the Georgia Supreme Court did what was right and did not buy into hate-based politics.

"I'm Michelle," she said when the suit was filed. "I'm the same Michelle they elected four years ago."

More CIVIL RIGHTS News
In an epilogue to the civil rights law story, Bruce's opponent in the election won the run-off. Bruce blames the lawsuit, and the resulting publicity for her defeat, but does not appear to be crying in her coffee.

Bruce told the Associated Press that she is taking courses at an online law school and hopes to pursue elected office at a later time. "I still have a dream to serve my community," she said. "And I'm not giving up."

Bruce's civil human rights case is an example of how far we, as a society has come while acknowledging that old prejudges and traditions which often fly in the face of basic civil and human rights, continue to exist. Nonetheless, even with the attempts of those who would find fault with Michelle Bruce's choice as to how she lives her life, basic civil rights law protects the individual, and provides for the right to live free of prejudice, in any form.

Click to learn more about LawyersandSettlements.com
LawyersandSettlements.com - A trusted, independent legal news provider bringing quality news and information on all legal cases and lawsuits filed in United States of America to its readers since 2002. Over 250,000 legal help requests including Civil & Human Rights Cases have been forwarded to lawyers all across to the country.