A major tenet of basic civil human rights is the right for privacy. So one can imagine the affront to civil and human rights after a sheath of confidential medical records was removed by an employee of a hospital in order to work at home over the weekend, only to leave the documents on a commuter train the following Monday. Judging from the musings of the attorneys for the plaintiffs, civil rights law will be brought to bear on this sad turn of events. 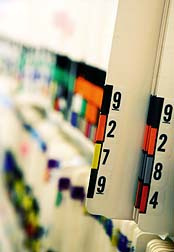 In March, an employee of Massachusetts General Hospital is alleged to have taken home the billing records of 66 patients having received care at the hospital's Infectious Disease Associates outpatient practice. According to a story in the Boston Globe that was posted on its boston.com website May 21st, the unidentified worker removed documents from the hospital bearing the names of patients, together with their social security numbers, their doctors and their diagnoses.

According to the Boston Globe account, the hospital employee had taken the records home for the weekend to work on them. Upon her return to work Monday without the documents in tow, it was discovered that she had left them on the MBTA Red Line commuter train before exiting the train car.

The Boston Globe quoted a hospital security report. The lost documents were not recovered.

Patients whose records were left behind on the Red Line train the morning of March 9th of this year will not only suffer from the potential availability and misuse of sensitive personal and medical information, but could also be open to identity theft given the availability of social security numbers.

When the issue was discovered and confirmed, the hospital had the difficult task of contacting the 66 patients involved.

In mid-May, two of the 66 patients who have been affected by the loss of privacy and corresponding breach of civil human rights filed a breach-of-privacy lawsuit in Suffolk Superior Court. The defendants are Massachusetts General Hospital, together with the unidentified billings manager. In the ensuing days and weeks, two more patients have joined the lawsuit and lawyers are talking of filing a motion to make the lawsuit a class action that could represent all 66 patients involved.

According to the Boston Globe account, a number of the 66 patients are HIV-positive, while the four un-named plaintiffs involved in the lawsuit against the hospital and its billings manager are, indeed HIV-positive.

According to the legal representatives of the four patients involved in the lawsuit, the plaintiffs are keen to learn what procedures and safeguards the hospital has put into place since the events of March 7 through 9th occurred.

According to court documents, existing protocol for Massachusetts General Hospital expressly forbids the removal of private patient documentation from the hospital.

Needless to say the four plaintiffs would like to know if the billings manager involved is still employed at the hospital.

In a statement, part of which was quoted in the Boston Globe story, Massachusetts General Hospital said, "We have learned valuable lessons from this difficult situation.

What makes the loss of these records even more worrisome for the patients involved, is the disclosure of their conditon and other sensitive medical information to individuals unknown.

More CIVIL RIGHTS News
"Although much has changed about HIV over the years, one of the things that hasn't changed is that for so many people the public disclosure of HIV status is still profoundly distressing and harmful," said Ben Klein, a solicitor with the Gay and Lesbian Advocates and Defenders group (GLAD). "Even though we don't know what has happened to the records, the sense of powerlessness that people have about not knowing what has happened to this very sensitive health information is profoundly distressing."

As this story continues to unfold, civil human rights and civil rights law will be at the forefront. A patient puts implicit trust, along with their most personal and sensitive health information into the hands of doctors and hospitals, content in the assumption that such documents are handled with care. However, sometimes this is not the case as this alleged breach of civil and human rights clearly demonstrates.

Posted by
Elaine
on August 19, 2011
What has happened with this case and the employee involved? Can we have an update please?