This isn't about swine flu, but there are parallels nonetheless. In a modern, democratic society—of which the US is justly proud—the provision for basic civil human rights is a hallmark of life in a respectful and advanced population. When that hallmark is sullied through a breach in civil and human rights, civil rights law is there to protect against the unjust treatment of an individual. 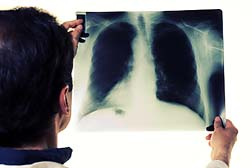 In this case, an Atlanta man who suffered from what was believed at the time to be a mild case of tuberculosis (TB) later found himself at the center of controversy after he traveled to Europe for his wedding in 2007.

The wedding, according to reports, took place as planned but life soon took an unfortunate turn for Andrew Speaker through a nasty vilification in the press. The Atlanta attorney became the center of an international scare thanks to alleged actions taken by the Centers for Disease Control and Prevention (CDC), which released his situation to the world media.

Speaker was originally diagnosed with what was thought at the time to be a mild form of TB in 2007. According to a report from the Associated Press (AP) Speaker was initially advised not to carry through with his plan to fly to Europe, where he was to be married. However, according to a lawsuit filed this week in Atlanta the CDC gave Speaker the green light to leave, provided he initiate treatment upon his return.

Once he was in Europe, Speaker was informed that tests had shown his body harbored an extremely drug-resistant form of tuberculosis identified as XDR-TB. Based on that information, doctors in Europe urged Speaker to return immediately for treatment.

However, according to an AP press report health officials also allegedly forbade him from boarding another international flight, thus putting the man in a classic Catch 22.

Meanwhile the CDC is alleged to have violated Speaker's civil human rights by calling a press conference and revealing Speaker's private medical history and other sensitive information during what was described as an extensive media blitz in May of that year.

For his part, Speaker is said to have flown into Montreal, Canada, and later drove across the Canada-US border into the United States. He subsequently learned that his infection involved a less severe strain after all—which was akin to what he initially was led to believe before he left for Europe in the first place.

Speaker was treated in a Denver hospital. But the US government also quarantined him; the first time an American has been so since 1963. His lawsuit against the CDC claims the incident led to death threats against him and the ultimate demise of his relationship with his new bride. The lawsuit also alleges that Speaker's reputation was damaged by the actions of the CDC.

More CIVIL RIGHTS News
The plaintiff notes that the CDC knew about his condition before Speaker left the country and appeared to support the idea that Speaker could be treated upon his return. The subsequent release of sensitive information once it was erroneously determined that the man harbored a more virulent strain put Speaker under the spotlight unfairly, given he had a less-severe case of TB after all.

The lawsuit is also reported to seek records of Speaker's test results that the CDC has allegedly refused to release despite requests through the Freedom of Information Act. Speaker is said to simply wish to set the record straight.

The CDC, in an AP report, indicated through a spokesperson that the Center was not in a position to comment about the pending litigation.

A violation of civil human rights is a serious allegation in such a fair and just nation as the United States of America. Basic civil and human rights include the right to one's privacy. When a breach occurs, civil rights law comes into play to ensure justice and fair treatment is served for all parties involved.