Homeowners with Chinese Drywall to Get Assistance

Congress passed federal legislation today to financially assist homeowners with Chinese Drywall. In an amendment to the "Mortgage Reform and Anti-Predatory Lending Act" the legislation calls for the U.S. Department of Housing and Urban Development and the Treasury Department to study the problem and report their findings and recommendations within 120 days—good news for many homeowners faced with foreclosure because of defective drywall. 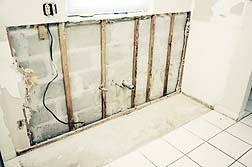 The investigation will focus on how many home foreclosures involve houses built or remodeled from 2004 to 2007 using Chinese drywall. As well, federal agencies will determine whether property insurance was available to homes discovered to have such defective drywall present. Unfortunately, many homeowners' insurance companies are not covering the cost of replacement and relocation: many have sought legal help.

The investigation will also give a better understanding of how severely this crisis is affecting the housing market and it will allow Congress to take necessary action to protect and assist impacted homeowners.

"Without any available assistance many homeowners are forced to decide whether to live in an impacted home or walk away and accept foreclosure in order to protect the safety of their family," said Congressman Vern Buchanan (FL-13), who helped pass the legislation.

Hundreds, and possibly thousands of homeowners have been physically affected by toxic fumes emitted from their defective drywall.

Rotten-egg-like odors have caused residents in at least five states to abandon their homes. It appears that some people are more sensitive than others to the sulfur-based fumes. Kerrie can't live in the condo she and her fiancé bought—-she suffers sinus and respiratory problems within minutes of entering the condo, but her fiancé is unaffected.

More CHINESE DRYWALL News
Just yesterday, CNN reported that a family in Florida has been sick for a year with upper respiratory infections, and other sicknessed they believe have been caused by Chinese dry wall. The family's physician, Dr. Ross Nochimson, said ""They're sick on a weekly basis. Earaches, sore throat. I give them something, and they're sick again," and told the family that they can't stay there any longer. Yorelle Haroush, who is pregnant, has already left the million-dollar South Florida home, built just 18 months ago.

As of May 5, The Florida Department of Health says it has received more than 330 complaints. Most of the Chinese drywall wound up in southwest Florida during the housing boom and shortly after hurricane Katrina which caused a shortage of US drywall. According to CNN's report, enough drywall was imported from China to build 30,000 homes.

Currently, the Environmental Protection Agency and the Centers for Disease Control and Prevention are doing studies on the health effects of the drywall. Toxicologists and industrial hygienists have identified four sulfur compound emissions in testing the Chinese drywall: carbon disulfide, carbonyl sulfide, hydrogen sulfide, and strontium sulfate (trace levels), at varying exposure levels.