A leading forensics expert on toxic mold raised a red flag recently about remediation of toxic Chinese Drywall. Spiderman S. Mulholland warns that it's one thing to have a contractor, or insurance adjuster agree to replace defective Chinese drywall. It's quite another to ensure it's done properly. 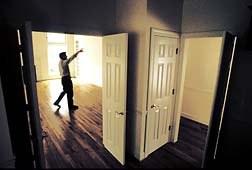 Mulholland is the senior forensic investigator and national consultant with US Building Consultants and US Building Laboratories Inc (USBCI). Last month, in the August 7th issue of Biotech Law Weekly, Mulholland cautioned contractors and those involved with remediation of Chinese drywall problems, that the out gassing of sulfur compounds and other elements will continue to occur after the suspect drywall has been replaced.

Various opinions have been flying around over the past year as to what remediation efforts would be required to adequately address the Chinese drywall issue, together with the acrid odors that have been driving people from their homes and turning air conditioning coils black. Opinions range from replacing all drywall in the home, to tearing the home down to its very foundation given concern that chemical compounds in the affected drywall leach into wood studs and other support structures.

Mulholland, of USBCI, makes the point that scientific tests and analysis of construction materials and their out-gassing properties associated to other materials found that absorption rates, higher levels of toxicity and cross contamination is a serious factor.
"In fact, under current remediation practices, we are observing the situation getting worse because proper controls are not in place; and there have been several unknowns that are just now being revealed through new science," he said.

Mulholland states that despite the gravity of the situation for some homeowners, a rush to remediation is not in their best interests.

More CHINESE DRYWALL News
"In our opinion, if people are remediating now, they are probably doing it wrong," Mulholland said. "We have been warning builders, remediation companies and homeowners for months not to start the remediation process yet. Without a proven standardized protocol for remediation, a secondary crisis can occur on top of the main crisis, essentially having to remediate a second time. "

Also of concern is adequate protection of those carrying out the remediation work. " In our opinion, those who are performing restoration without proper control could be jeopardizing their own health since several key dynamics are at work during the restoration. Some new scientific testing is being conducted for the first time and this is proving to be more complex than what any of these scientists had thought."