As one of the first Chantix lawsuits against Pfizer becomes official this week, the entire Chantix issue just gets weirder: on one hand the US Food and Drug Administration (FDA) highlights the risk of suicide in the Chantix Medication Guide. On the other, government health officials reportedly continue to urge smokers to use Chantix as part of any smoking cessation program. 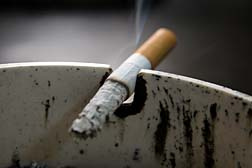 The justification appears to be that smoking kills more people in America than Chantix ever will. Thus, it's okay to use a drug that has so far brought in nearly 1000 reports of serious adverse effects, including suicide ideation. And that appears to make everything okay.

Indeed. Just try telling that to the widow of David Collins, of Gas City Indiana. Linda Collins filed suit Tuesday in US District Court in Indianapolis alleging that Chantix contributed to her husband's suicide. According to the file Collins began using Chantix in October of last year, and had no history of psychiatric problems before tragically taking his own life.

Others have taken their own lives while on Chantix, or have experienced suicidal thoughts. And yet efforts to persuade the FDA to consider a black box warning for Chantix—the industry's most serious warning—have come up against a brick wall. Public Citizen, the public advocacy group founded by consumer crusader Ralph Nader, has been after the FDA to assign that black box warning. But to no avail.

There are many reasons, it appears, why they should: not the least of which is the revelation coming out of the Collins lawsuit discovery that the active ingredient in Chantix was alleged to have been derived from cytosine.

The latter has been linked to suicide, and that link has existed for thirty years. The lawsuit claims that not only should Pfizer have been aware of the concern for suicide stemming from cytosine, it accuses Pfizer of historically delaying the publication of scientific papers and data not favourable to its products, or marketing strategies.

Chantix works by targeting those receptors in the brain that respond to nicotine. By blocking the pathway of nicotine to those receptors, the release of pleasure-emitting dopamine is severely restricted. In theory, Chantix is started while the patient is still smoking. Then, as dopamine levels drop and the patient derives less pleasure from smoking, the actual act of butting out for good is initiated. As hard as it is to stop smoking, it was thought that Chantix would make the task easier—and in theory, it should. Were a patient to lose resolve and light up, the reduced dopamine should severely limit the pleasure normally derived from smoking. In other words, if there's no pleasure, what's the point?

It may work in theory. However, in practical terms the results have been anything but. For some, it has worked famously. But for others, there have been severe problems. And part of the aspect of smoking cessation that Chantix does not address are the lifestyle issues that go along with any attempt to quit smoking. It's one thing to lose the pleasure from it. But what is equally hard is re-drawing your life without that cigarette in your hand.

When stressed, you can no longer light up. When you're out for a beer with the boys, you can no longer light up. What do you do with your hands, without a cigarette in it? These are hard lessons, especially for middle-aged adults who have been smoking since they were teens. They know of no other life, and now they suddenly have to re-focus their lives, their everyday existence, without them.

In clinical tests, Chantix performed better than Zyban, its nearest rival. But at the end of the day most of the trial participants who attempted to quit with Chantix, did not succeed. And this, in spite of the fact that trial participants were reportedly hand-picked. Anyone with grievous physical, or emotional health issues was weeded out. What's more, trial participants benefited from regular counselling, in an effort to deal with those very smoking cessation issues that the chemical aspect(s) of Chantix were never designed to address.

Most Chantix users, once the product was on the market, did not have access to the kind of counselling enjoyed by the majority of trial participants who failed anyway. And according to observations made at the Smoking Cessation Center at the Columbia University Medical Center, the hand-picked trial participants made for a lousy representation that did not adequately reflect the make-up of the smoking population.

"I run a clinic," says Dr. Daniel Seidman, director of the facility, "and two out of three smokers I see have psychotic or mood problems."

Did two out of three participants in the Chantix clinical trials suffer from psychotic or mood problems? Not likely. So how useful, really, were those clinical trials? And how effective were they in assuring the drug-buying public that Chantix was a safe way to quit smoking? Quitting is hard enough on its own. It can be misery at the best of times, and most fail. Chantix was meant to make it easier for smokers to quit, and for some it has proved helpful. But to others it has not only made things worse, it has put them on a path to suicide.

In the US, 34 Chantix users have reportedly committed suicide. The FDA admits that its preliminary assessment revealed that many of the cases reflected new-onset of depressed mood, suicidal ideation, and changes in emotion and behaviours within days, to weeks of initiating Chantix treatment.

More CHANTIX News
And the recently-approved Medication Guide on Chantix by the FDA was accompanied by an alert to highlight changes to the "Warnings and Precautions" section of the full prescribing information regarding serious neuropsychiatric symptoms linked to Chantix. Symptoms include changes in behaviour, agitation, depressed mood, suicidal ideation, and both attempted and completed suicide.

And, while the new smoking cessation guidelines, published by the US Public Health Service, acknowledge that Chantix links with suicide and other psychiatric side effects, the Pfizer drug is promoted as the method most likely to help smokers wanting to quit. The lead author of the guidelines, Dr. Michael Fiore, allegedly has ties to Pfizer.

Once upon a time they made a movie about the tobacco industry. Perhaps they'll make a movie about this, too. But not until the wave of lawsuits that will surely stem from this controversial drug, make their way through the courts.