Little Gavin Shore has endured a lot. Since he was born almost a year ago with persistent pulmonary hypertension (PPHN) and Shone's complex, Gavin has spent much of his short life in hospital. He also endures monthly doctor's visits and will require at least one more surgery. His mother Lacee Shore, blames Celexa, an anti-depressant drug she took while pregnant.

Celexa (Citalopram) is a mild antidepressant prescribed to increase serotonin levels in the brain. It is in the selective serotonin reuptake inhibitors (SSRI) category and manufactured by the Danish pharmaceutical firm Forest Laboratories. 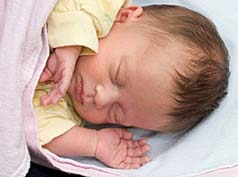 It first came under suspicion just a few months before Gavin was born, when the February 9th, 2006 edition of the New England Journal of Medicine published a study showing higher rates of PPHN in children whose mothers took SSRIs during pregnancy. The study followed 1,213 infants, and found that the use of SSRIs during pregnancy, especially late pregnancy, elevated the incidence of PPHN in newborns by 6.1 percent. This prompted the Food and Drug Administration to issue a stern warning regarding the use of SSRI antidepressants during pregnancy.

PPHN is a condition where the blood circulation bypasses the lungs, depriving the body of needed oxidization; Shone's complex is a rare form of congenital heart disease that often causes multiple defects which can obstruct the blood flow from the heart to the body.

More News
PPHN typically occurs in approximately 1 or 2 infants per 1000 live births. Newborns with PPHN must endure rigorous regimes of invasive and costly medical procedures including high frequency ventilation, nitric oxide, and extracorporeal membrane oxygenation (ECMO) to bring and keep their condition under control. But even with these lifesaving treatments, PPHN is still associated with substantial morbidity and mortality with 10 to 20 twenty percent of affected infants eventually dying from the condition.

About one fifth of infants who survive PPHN will experience long-term physical or developmental complications such as hearing problems. It is recommended that children with PPHN be evaluated by a hearing specialist during early childhood to check for hearing loss, and to have their speech development monitored.

To offset Gavin's numerous and costly medical bills his parents are looking into bringing suit against Forest for compensatory and punitive damages.

If you took Celexa while pregnant, and your baby was born with heart defects, please contact a [Celexa Birth Defects] lawyer who will evaluate your claim at no charge.
Request Legal Help Now