What follows are four anecdotes of credit card abuse. Daily, people's lives are being destroyed by unfair rate hikes, by unscrupulous credit card companies. Countless consumers are so deep in debt that any day now, they face foreclosure on their homes. Many have sunk into deep depression and can't find their way out. Isn't it time the government stepped in and put a stop to unfair credit card rate hikes?

Many consumers signed on the dotted line, agreeing to a manageable nine percent interest, only to find a few months later that their interest rates soared to more than 30 percent! Really, Tony Soprano gave better rates than some of these companies that are no better than crummy loan sharks. 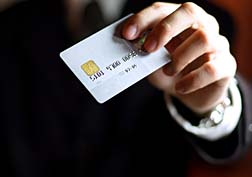 Chase credit card company raised Adam's rate to 29.99 percent despite the fact that he said he never paid a bill late in his entire life. "I have about a $6700 credit limit with this Chase credit card," says Adam. "I maxed out the card doing home improvements, and planned to pay it off as soon as possible." Adam actually paid the minimum required payment, but on his next monthly statement, Adam noticed that his rate was raised to 29.99 percent (this was initially a 0% card) without any notification—that he was aware of anyway (Often, credit card companies send notices of rate hikes by mail and they invariably get filed into 'junk mail'.)

"I called customer service several times to request that the rate be lowered. I spoke with at least one "supervisor" and not only were they rude, but they did nothing to help me," says Adam. "I'll pay it off and never deal with these loan sharks again." Well, there's one consolation here: Adam is not alone.

"I paid my Chase and Capital One credit card on time and the amount requested, " says Monica. "But I received the bill again this month and another over-the-limit fee is on the account. I did not purchase items, the over limit came from interest. I don't have a problem paying if I made a purchase but, I paid what they asked for on time and still ended up with a fee. What can we do? I am furious with this kind of abuse."

Nicole says that the best way to explain what happened to her is by a time-line:

My problem here is that, when the transaction went through, there were sufficient funds in my account. They refuse to remove the over- the-limit fee. It is only $39, but to me it is the principal that I did NOT spend over my limit. It was the company's own delay in posting the charges from 11/17 that makes it appear to be as such."

And this testament from Donald is really infuriating:

Donald received a new GM credit card including a new customer number. He never pays interest because Donald's bills are paid online each month, a few days ahead of time.

"I did not notice that my GM card account number had changed so I continued to send the payments via Bill Pay to GM," says Donald. "However, I did not notice that for two months the payments were not received by GM because of the new customer credit number--it did not match the previous one. I found out they had not received payment when I tried to make a purchase and the card was declined.

One more from Cathy to really make your blood boil:

Have you ever been charged a transfer fee? If you are like most consumers, you'd probably wonder what it means. And invariably, you never read anything about transfer fees in the fine print of your credit card contract. It's yet one more abusive tactic the credit card companies use to nickel and dime their customers. Or sometimes take them for thousands of dollars.

More News
Cathy applied via mail for a Chase transfer fee waiver and their 0 percent introductory offer. "Just a few days later a representative from Chase called me to set up the account," she says. At that time I asked the representative if they were going to transfer my whole account and she said 'No just $3000.00.'

I never told her what my balance was so she obviously had it in front of her face. My very first statement had a $90.00 transfer fee on it. If I was told there was going to be a charge-- of which I wasn't-- I would have declined opening an account with them. I am on a very fixed budget and cannot afford the fee. The whole reason for opening this account was to save money on a finance fee with another credit card company. They fraudulently represented themselves and now I'm totally stressed out and loosing sleep over this."

If you have been a victim of any unfair practices by your credit card company, please contact a lawyer involved in a possible [Credit Card Rate Hikes Lawsuit] to review your case at no cost or obligation.
Request Legal Help Now