When Someone Else's Car Accident Puts You in Hospital

Car accidents happen every day, and they happen to good people. But a car crash in Pittsfield, Massachusetts just six days into the New Year illustrates just how easy it is to be going along, minding your own business and doing everything right, only to have someone plow into you and suddenly turn your world upside down.

That happened to Diego Rawson, 19, of Dalton and Katherine Frisina, 34, of Pittsfield. It was about 6:30 on the evening of January 6th when Rawson, driving his 2002 Chrysler PT Cruiser southbound along South Street in Pittsfield, suddenly heard a sickening crash coming from the rear of his car, and the PT Cruiser lurched forward. 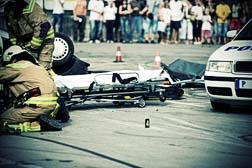 Rawson had just been rear-ended by a 2008 Subaru Legacy. He had just been driving along, minding his own business when—WHAM! —out of nowhere, another car was upon him.

But that wasn't the end of it. The 2008 Legacy careened away from Rawson's PT Cruiser by the force of the impact and was sent into the northbound lane where it came into collision with, oddly enough, another Subaru Legacy. The latter was a 2006 model driven by Frisina.

Frisina could not have known that a quick northbound trip along South Street would land her in the hospital with undetermined injuries. How could she know that a car would suddenly show up in the middle of her lane? She would have been in the right, most likely travelling at a safe rate of speed, with her headlights on and her seatbelt done up tight. Suddenly, there is a car on top of her.

The accident is still under investigation, but it was reported that the newer Legacy that rear-ended Rawson's PT Cruiser before slamming into Frisina's slightly older Subaru head-on, had been seen weaving in traffic just before the accident.

Why the weaving? The reasons for Michael Tomascak's behavior behind the wheel, and the subsequent cause of the accident, are yet to be determined. Weaving could be a sign of intoxication, or driving under the influence—although news reports made no mention of the administering of a Breathalyzer test.

But Tomascak, 31, could have also been tired. It has been proven through research and driving tests in controlled conditions that severe exhaustion and sleepiness is equal, in terms of impairment, as having a greater than 0.08 per cent blood/alcohol level, or impairment from other drugs.

The driver may have been distracted by a cell phone, Blackberry or other portable device. While drivers talking on their cell phones and removing their primary focus from the task at hand has long since been a frustration for police, the latest wrinkle has drivers reading, and actually composing text messages while they drive. Similar devices that allow drivers to check their emails while on the fly, and even browse the world wide web regardless of where they are, is proving to inject even more distraction into the driver's environment.

That's not to say the aforementioned possibilities were at play in this particular instance. The fact remains, however that the level, and possibility for distraction for drivers has never been greater. And beyond the harm such a distracted driver can bring to himself, remains the possibility of extending that harm to other drivers on the road.

Luckily, the driver of the PT Cruiser that was initially rear-ended was not injured in the mishap. However Frisina, who was motoring along South Street minding her own business only to find another car suddenly careening into her path, was taken to hospital with undetermined injuries. The extent of her suffering is not known, but it is grossly unfair to Frisina, and to any driver for that matter, that such injuries, suffering and damages to personal property should occur through no fault of their own.

More AUTO ACCIDENT News
That's why qualified car accident lawyers are worth their weight in gold. They know the legal nuances, the procedures and protocols involved in pursuing cases such as these. It's especially important if a car accident that is the fault of someone else results in long-term suffering, and the requirement for expensive medical care. Such accidents have been known to put drivers off driving altogether, which could have an impact on life and livelihood.

And why shouldn't all roads with two, opposing lanes of traffic, be equipped with barriers preventing vehicles from being pushed into a lane with oncoming traffic? Can, and should municipalities and jurisdictions be held accountable?

A qualified car crash lawyer can answer those, and other questions—and ensure that you are compensated fairly, for a car accident that occurred through no fault of your own.

If you have suffered losses in this case, please send your complaint to a lawyer who will review your possible [Car Accident Lawsuit] at no cost or obligation.
Request Legal Help Now