For decades, vehicle manufactures have long agonized over the issue of fuel tanks and fuel systems, and the most appropriate and effective way to prevent leaks or ruptures that may cause a fire and affect vehicle crashworthiness.

However, fuel tank placements that might otherwise serve to maximize the safety of drivers can be mitigated by the potential for poor workmanship and materials, including the inability of the system to withstand the rigors of everyday use and, over time, corrosion.

Case in point: The KIA Sportage. In January of last year the Office of Defects Investigation (ODI) through the National Highway Traffic Safety Association (NHTSA) launched an investigation after reports of leakage from fuel tanks amongst owners of KIA Sportage Sport Utility vehicles. Initially, the model years affected were 1999 and 2000, but that was soon expanded to 1996 through 2002. 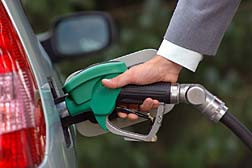 Almost two years later, the file is still open and the investigation is ongoing. According to an ODI summary posted on its web site, KIA has identified corrosion as a primary factor, among others. Exterior corrosion can occur if the protective polyvinyl chloride coating is disrupted or breached in any way (usually at the bottom of the tank), or at the top of the tank where the fuel-sending unit is mounted.

Corrosion is not uncommon in coastal areas with a high concentration of salt in the air, or in colder climates where roads are awash with corrosive slush each winter. However, it would be incumbent upon manufacturers to ensure that fuel tanks and delivery systems that are exposed to sometimes punishing scrapes while navigating rugged terrain in an SUV--or the corrosive forces of road salt--are designed to withstand such realities. And who do you know that actually gets the hose up ON TOP of the fuel tank, to flush out any salt which may have accumulated up there? Didn't think so.

And who can forget the GM recall of 2004 when almost a million Pontiac, Buick and Oldsmobile vehicles equipped with the popular L36 V6 engine were cited for defective Delphi fuel pressure regulators that carried a high incidence rate of allowing fuel to leak into the intake manifold via a vacuum line. The combination of the fuel leak and a mis-timed spark could cause the engine to backfire--something that not only scares the pants off of the driver, but which could also rupture the intake manifold. This, in turn, could cause a serious fuel leak that could cause an engine fire.

Gasoline, as most know, is extremely flammable. Even the fumes associated with petroleum products can be explosive. Little wonder you are directed to shut off your car, when at the fuel pump. And all it takes is a small fuel leak, together with a spark from a tossed cigarette or some other source of ignition, to fuel the fire that is suddenly under your car.

And there's nothing like a loud bang, followed by smoke and flames shooting out from under the hood, to give you pause to pull over and bail from the vehicle immediately if not sooner--even though it might not be safe to do so.

More News
That's assuming, travelling at 65 miles an hour with flames shooting from your car, if you can even control your vehicle at all.

A catastrophic crash in the making.

Akin to brakes, steering and headlights, the fuel system needs to be over-built, and failsafe in every vehicle.

Think about it: what makes an engine run is the controlled combustion of a highly-flammable liquid, together with a spark. Gasoline meets fire. Boom.

When those two systems are kept absolutely segregated until the final, magnificent mini-explosion in the controlled confines of the piston chamber, all is well.

However, if there is a breach, or a leak and those two entities cross paths where they shouldn't, that control is out the window.

And all hell can break loose. Literally.