California car accidents are like car accidents anywhere—they can be dangerous and deadly. And even when California auto accidents don't take lives or cause injury, actual damage can be extensive and the potential for injury or death is always present. 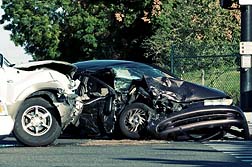 Especially when there is a high-speed chase involved, as was the case Friday night in Vallejo, California.

The Vallejo Times Herald reports that police officers gave chase to a vehicle that sped past a sobriety checkpoint at Solano Avenue and Sonoma Boulevard just after 8pm on October 16, running the stoplight at Curtola Parkway.

Police gave chase, a high-speed cat-and-mouse game that saw the suspect car gunning along Sonoma Boulevard at speeds in excess of 90 miles per hour. The suspect is reported to have also run every red light that got in his way.

The chase came to an abrupt halt when the suspect vehicle rammed a light standard and struck three parked cars before finally coming to a stop.

The suspect reportedly sustained a broken leg among other injuries. Aside from extensive damage to the three parked cars there were no other injuries. The owners were elsewhere when their vehicles were struck and miraculously, other cars that might have been proceeding through the intersections run illegally by the suspect were spared.

Was this California Car Crash Preventable?

It could have been far worse. Safety advocates have long since questioned the wisdom of police chases and the harm such a pursuit could have on innocent motorists or pedestrians. Police forces have responded by stressing a pursuit is only initiated when it is safe to do so and it can only be assumed that the officers involved took that view.

However, 8:12pm—the time that the high-speed pursuit was reported to have been initiated—is hardly indicative of low, or no traffic. The damage a speeding car, travelling at a velocity in excess of 90 miles per hour, running a red light and striking a car coming through the intersection is incalculable.

It is not known if police had time to position squad cars at the various intersections along Sonoma Boulevard to prevent cross-bound traffic, in order to allow the fleeing car to pass safely. If such a preventative strategy was implemented, it was not reported.

What is known is that damage to the three parked vehicles was extensive. One car was itself flung into a light pole from the force of the collision and literally folded in half.