Burn injury: There are many Dangers out There...

There are many different types of burns, and different causes of burn injuries—fire being the most obvious. But there are other sources for the intense heat capable of producing a burn, such as injuries from caustic chemicals.

And chemicals can burn more than just the skin. A chemical that gives off powerful and potent fumes can be inhaled, burning the inside of the lung.

Boiling water. This writer will never forget the day when, as a child, he stood by in horror as his mother dropped a full kettle of water, going at full boil, onto her unprotected foot.

When they gingerly cut away her sock at the hospital, all the skin from the top of her foot peeled back with it. Her foot was over a year in the healing, and she could never wear a shoe comfortably again. 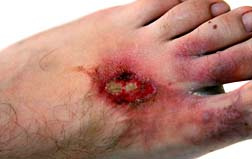 Burns can happen by accident: fumes can be set alight by an unexpected spark. A piece of clothing can catch fire, as was the case with a former member of our community, since moved away, who died while visiting her daughter. She was alone, cooking one day when her loose-fitting robe caught fire from the stove.

But sometimes they are not accidents at all. Sometimes they are malicious attacks, such as that which happened to 5-year-old Youssif from Baghdad, after a gang of masked men without provocation doused the lad with gasoline and set him ablaze.

He survived, but the skin and flesh of his face literally melted from the flames and heat.

Sometimes, burns can be caused by occurrences, which may surprise you, such as electricity. And often they, too, can be prevented.

Jon is an electrical worker. So is Andy: "The skin on my face was basically burned off. Lost parts of my ears...there was actually metal impaled in my teeth," says Jon."

"Something was probably telling me 'Get out of that room' and I finally get out of the room and he follows me out," says Andy. "And I can remember patting, he was patting my head, as he told me later, he was still putting the fire out, that my hair was still burning."

And then there was Don. "When I looked back and saw I had no pants on the back of my legs, and literally, the skin was hanging off my arms and legs, I just...I just knew something horrific had happened."

The three men you just met are electrical workers, who volunteered their comments and their stories for an educational awareness project on the dangers of arc flash, a serious potential hazard associated with working amidst high-voltage circuitry.

If anyone ever thought that hazards from electricity were confined to electric shock, think again. Electricity can, and does burn. Sometimes severely.

An arc flash can occur while working on an energized circuit (translation, when the power is still ON), or when electrical equipment fails.

Jon and Don were tasked with performing preventative maintenance on some switchgear at a building. A disconnect-out in one of the panels needed to be changed. Jon remarks that as he got to one of the switches that was still energized at the line side (powered ON), an arc flash occurred when he closed the disconnect door.

The flash was bright, powerful, hot, and violent. His partner described it as a horrific explosion, with a ball of fire and noise that sounded like deafening gunshots. It blew Jon straight back into the wall behind him. His partner, who was not impacted by the initial explosion, was burned by the continuing arc flash as he bent down to help his injured partner.

More News
Jon sustained burns to 58 per cent of his body, some quite severe. Andy was another victim of an arc flash that severely burned his face. Recovery required an induced coma that lasted for five weeks. In Andy's case, he was working on equipment that should have been powered down. But it wasn't, and by his own admission reveals that he should not have acted in such a cavalier fashion, to think that he could have worked on an energized circuit and not risk injury.

The electrical industry is working to better educate workers on the hazards, and dangers of arc flash. In the end, however, experts agree that the safest way to work on an
electrical circuit is to de-energize, lock-out, and then verify that the circuit is de-energized.

In other words, unplug it. Don't allow anyone to force you to work on something, that isn't.