Got a Botox shot lately, to mitigate those wrinkles? Here's the thing—Botox could actually provide one little wrinkle of its own: You could die from it.

Earlier this month the US Food and Drug Administration (FDA) was petitioned by the advocacy group Public Citizen to release warnings about Botox, a product that is more generally known as a cosmetic injection, but has far more uses including, although unapproved, children—mainly with cerebral palsy. 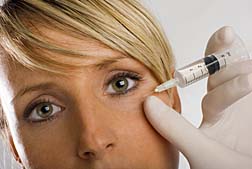 In fact, the FDA has reported several deaths in children. Yes, from Botox. But not from 'that'...lest you think that children are getting injections to smooth wrinkles or plump up their lips for kiddy fashion shows, Botox and Myobloc have a myriad of different uses.

Hence the myriad of risks.

Botox and Myobloc are two separate, but related products which utilize botulinum toxin, the latter capable of blocking nerve impulses to muscles. This can have all sorts of uses, from cosmetic purposes on down, and since approved in 1989 and 2000 respectively, Botox and Myobloc have been embraced.

The FDA first approved Botox in 1989 to treat spasm of the eyelids (blepharospasm) and misaligned or crossed eyes (strabismus). Eleven years later the drug was approved to treat severe neck muscle spasms (cervical dystonia), and in 2004 its usefulness was expanded again to treat excessive sweating, known scientifically as severe primary axillary hyperhydrosis.

The only cosmetic use approved is for the temporary smoothing of forehead wrinkles between the eyebrows.

That's it. However, it is a common belief that Botox has been embraced by the rich and powerful. Thus, the so-called beautiful people are having Botox injections all over the place, supporting the allegation that Botox is being used for all sorts of unapproved cosmetic uses.

The reported deaths in children are alarming, in that Botox is not approved for use in children in the United States, for any reason. However, the FDA is reported to have documented incidents where children, mostly cerebral palsy patients, were administered Botox for limb spasticity.

Like Botox, Myobloc was approved in December of 2000 for the treatment of adults with cervical dystonia.

The problem with both of these products is when and if the botulinum toxin spreads beyond the injection site. The FDA was aware of this potential, and product labels include a reference to the possibility of systemic adverse affects, such as difficulty in swallowing, or breathing. Product labels even refer to the possibility of death in patients with neuromuscular disorders such as myasthenia gravis.

This latest wrinkle, however, is the revelation that the botulism toxin (which is what Botox and Myobloc is), appears to be doing harm to people who do not have neuromuscular disease.

In other words, that Botox injection you got for your forehead, or other areas unapproved, could spread well beyond the injection site. Suddenly you can't swallow, you can't breathe, and maybe even you die.

The FDA issued an alert on February 8th, and is asking Botox and Myobloc manufacturers Allergan and Solstice Neurosciences Inc, respectively to provide additional safety records.

However, Public Citizen says nuts to that, and urges the stand-pat FDA to do much more, including the issuance of a black box warning, the strongest position the FDA can take for a drug beyond an outright recall.

Sidney Wolfe, MD and Director of the Health Research Group at Public Citizen, notes that paralysis of the respiratory muscles and associated difficulty swallowing (a condition known as dysphagia) can allow food or liquids to enter the respiratory tract and lungs, leading to aspiration pneumonia.

"Our analysis of FDA data found that the makers of the drugs had reported 180 U.S. cases of people developing serious conditions after receiving injections, including 16 deaths."

More News
However, it took a petition by the advocacy group asking the FDA to ratchet up the warnings over Botox and Myobloc, before the latter stepped up to the plate, which it did two weeks later, in early February.

Public Citizen is not satisfied.

"It's not enough that the FDA publicly acknowledges the risks of using botulinum toxin; in fact, the agency did this much in a published article three years ago," Public Citizen's Dr. Wolfe notes. "The FDA must immediately force the drug makers to send out warning letters to doctors, similar to what drug regulatory agencies in Europe already require. The FDA also should label the products with a "black box" warning, the strongest warning the agency can make and require doctors to hand out medication guides to patients, warning them of the early symptoms of an adverse reaction.

"The FDA needs to move quickly to educate physicians and patients. Nobody should be dying from injected botulinum toxin."