Botox: Risk of Injury and Death Tough to Swallow

Imagine drowning out of water. That's what aspiration pneumonia could feel like as a result of the migration of a Botox treatment into an area of the body it was never meant to treat. So far 16 deaths have been reported from the use of Botox.

While Botox is more widely known for the smoothing of wrinkles and for cosmetic purposes, the treatment has many other uses and was originally approved for treating cervical dystonia, a painful knotting of the neck muscles. 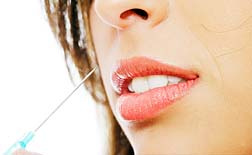 Botox works by the injection of trace amounts of botulinum, a toxin that blocks nerve impulses to muscles and causes them to relax. It's the same principle that is responsible for the cosmetic improvements Botox is famous for. Wrinkles are thought to be caused by the involuntary contraction of certain muscles, in the forehead for example. By injecting small amounts of botulinum toxin into the muscle, doctors found that the muscles at the point of injection relax, and the wrinkle is improved.

The effect is only temporary—about four months—but delivered so profound effects that all of a sudden people were hosting Botox parties.

Indeed, Botox has found many additional uses, all related in some fashion to the relief of knotted muscles and muscle spasms for which it was originally approved by the US Food and Drug Administration (FDA).

In 2002, doctors were discovering that Botox injections in children afflicted with Cerebral Palsy were benefiting due to the easing of symptoms related to limb spasicity.
Dr. Darcy Fehlings, a developmental pediatrician at Bloorview Kids Rehab in Toronto, has been using Botox to treat children with Cerebral Palsy for a decade. Every candidate is carefully assessed, and dosages are precisely determined and carefully monitored. In ten years, the doctor has never been met with unwanted side effects.

But that hasn't been the case elsewhere, and there have been several deaths of children in the United States after they were administered Botox injections. Most of these children were afflicted with Cerebral Palsy. The FDA has noted that in its view some of these deaths may have been hastened by the injection of too much Botox.

The FDA also notes that Botox was never formally approved in the United States to treat limb spasicity in either adults or children, and was not approved for children under 12 for any reason.

But back to the drowning out of water. In treating patients for cervical dystonia, doctors inject small amounts of Botox into multiple regions of the neck, relieving pain that has been described as disabling, for weeks or months at a time. The outside window of effectiveness is usually 120 days, before the effect wears off.

The problem is how close the neck muscles are to the esophagus. Were the injected botulinum toxin to remain exactly where the doctor injected the Botox for the duration of treatment, all would be well. However, in rare cases botulinum toxin has been found to migrate from the injection site. If that site is within close proximity to the esophagus and the Botox migrates, it can have the same kind of relaxing affect on the esophageal muscles, as the muscles for which the Botox was used to treat. This partial paralysis of the esophagus can cause difficulty in swallowing.

It's something we never think about, given that we do it several hundred times a day. Like breathing, and your tongue, swallowing is something you just do, and don't give a second thought. If you did, one might appreciate the dance that happens in the throat every time a swallow is anticipated and carried out.

You only have one throat after all, but that one throat serves two masters: your stomach, and your lungs. Like a switch on a set of tracks, the esophagus is that marvel of nature that switches the train, in this case your food, your coffee, even your saliva to the right track—in this case, your stomach. You wouldn't want any of that stuff getting into your lungs.

That swallow happens so effortlessly, so many hundreds of times per day, you tend to forget that every time it happens, by steering food and fluids away from your lungs, your esophagus is saving your life.

Imagine if that particular muscle becomes paralyzed, or even partially so. Suddenly you can't swallow properly. And suddenly you have fluid and food in your lungs.

Such migration is rare, but it can happen, and has. Of the 16 deaths reported, four were in children. One other death was thought to be the result of cosmetic Botox treatment, rather than therapeutic. There have been scores of reports outlining adverse effects. The FDA has received no fewer than 658 reports associated with Botox and Myobloc, a competitor.

More News
The FDA issued an advisory February 8th two weeks after the advocacy group Public Citizen petitioned the FDA to act, requesting among other interventions a black box warning on Botox labeling, the strongest warning the FDA can issue without removing the drug from the market altogether.

Public Citizen notes that on August 9th of last year, the Danish Medicines Authority published an analysis of adverse events links to both Botox, manufactured by Allergan Inc, and Myobloc, made by Solstice Neurosciences. According to the advocacy group there were 600 problems associated with the drugs, half of which occurred after the toxin spread.

In Europe Botox and Myobloc are marketed with prominent labeling, warning of the potential for the spread of the toxin and that muscle weakness associated with Botox could be long-lasting, especially among children, the elderly and anyone suffering from serious neurological problems.

The FDA said it is studying the issue.

Posted by
michael j sarto
on December 4, 2019
Ihave had gerd/reflux for 30 years. now they want to give me the injections of botox. After reading information about it, I will not do it. It only last a few months and is not worth the risk of complcations.
Posted by
Alice O'Neal
on January 26, 2019
My husband has been receiving botox injections to help with vocal cord issues. Now he cannot swallow and is on a feeding tube. This is week three and we are beside ourselves. He has lost 20 lbs and is so weak I had to bathe him today. Can you help?
My telephone number is 707 600 xxxx
He has been seen at UC Davis.