Try to forget that the needle about to inject a substance in your brow is a derivative of a deadly bacterium.Try not to think about the fact that the same Botox used to paralyze the muscles that cause your crow's feet and furrowed brow, has also been known to migrate away from the injection area and can have the same numbing effect on muscles much more important to your survival than your laugh lines.

Such as your ability to swallow.

Botox is the dreaded clostridium botulinum toxin dressed in new clothes. Talk about the ultimate makeover. The deadly bacterium that lay at the root of botulism has been given a new lease on life as a substance that can make you look fabulous without the face lift. 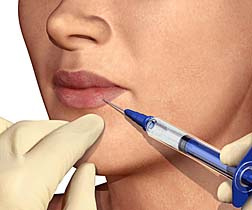 It was once the bastion of the rich and powerful, and for a time the source for daily debates on just which member of the Hollywood jet set has had her shot of Botox today. Now everybody's doing it. And that includes the guys.

While the medical community advocates that a Botox injection is a procedure best done in a doctor's office by a skilled professional, injections have become so commonplace now that most spas offer them. And yes, the Botox party still exists.

There are even people who sell the stuff on eBay. We have become de-sensitized to any risk, as we often do as a society once time and familiarity dulls the cautionary tone.

For example, there was a time when surgery of any kind was a huge, life-altering decision—such were the risks. Despite massive advances in science and technology, there are still risks. There can still be complications. However, major surgery such as heart bypass and even organ transplants are so commonplace today, we hardly give it a passing thought.

Oh, you're going to have your chest opened up, or have deadly botulinum toxin injected into your forehead? Okay, but don't forget to pick up some milk on the way home.

The point is this: surgery and other procedures such as Botox injections carry no less risk than they ever did. Sometimes, as we go along and as you will read, there are new risks revealed that we didn't know about. However, we have become complacent. And complacency carries a threat to due diligence, and kills the curiosity to ask questions.

What IS this stuff you're injecting into my face in my neighbor's living room in front of all of my friends?

Like any injection or any invasion of the human body with a scalpel or otherwise, such a procedure is just that: an invasion of the natural environment. The human body did not come equipped with a trap door by which surgeons could rummage around our insides, or with a built-in IV through which external fluids and foreign substances designed to dupe the aging process are added. For that matter, over-active bladders are a simple sign of the natural state of aging, and were not meant to be quelled by popping a pill from an over-active pharmaceutical industry.

Yes, modern medicine has prolonged our lives, and the advent of plastic surgery (most of it cosmetic and much of it optional) allows 63-year-old men to look like 30-year-old mannequins from the neck up.

But it should never lull us into the kind of complacency that stops us from asking questions.

About Botox, for example. One has to wonder if anyone ever asks just what this stuff is, and how it works. Okay, so to mitigate the wrinkle for a few months, the toxin paralyzes the muscle thought to be responsible for that wrinkle. It stops it from working, but only for four months or so.

Great. Then, as you look out at your lawn and see the seeds of a single dandelion blowing in the wind to infect the remainder of your otherwise pristine lawn, or when you read about someone with a single wound on a limb that becomes infected, and the infection somehow spreads despite your best efforts, you might be compelled to ask...

The answer by the way, is yes. It can happen. While so far only one death has been attributed to the cosmetic use of botulinum toxin, other uses of the substances (for muscle sapcicity, and other muscular disorders) have resulted in several deaths and scores of injuries. The consumer advocacy group founded by crusader Ralph Nader is campaigning for the US Food and Drug Administration to add a black box warning to Allergan Inc's Botox, and Solstice Neuroscience Inc's Myobloc—and to further alert the public on the potentialities and risk for death and injury.

Botox was licensed for cosmetic use in 2002, and it was widely held that the toxin—the basic building block of botulism, a severe and often fatal condition that progressively paralyzes muscles including the heart and lungs—in small, injected doses stayed in place for four months, before losing strength and wearing off.

However, recent incident reports and new research suggests that isn't necessarily the case. In a recent Canadian study conducted at the University of Calgary, Dr. Walter Herzog discovered that botulinum toxin did, indeed migrate after experimenting on cats and injecting amounts of the toxin into a muscle at the back of the leg.

Measurements were taken after four weeks—reportedly the time it takes for Botox to achieve full effect—to determine the strength of the injected muscle, and that of a neighboring muscle.

"What we found was that the toxin passed easily into the surrounding muscles and weakened all the muscles in the area. The results support other research that has already shown that botulinum can pass through muscle fascia (the packing tissue around muscles)," stated the scientist. "Our research showed that the toxin can also affect the working of the neighboring muscles." The findings were published in the Journal of Biomechanics.

Botox has many therapeutic indications, and used wisely and carefully botulinum toxin, despite its risks, has proven effective in the treatment of neurological disorders characterized by abnormal muscle spasms. When injected into a muscle, Botox blocks the neurotransmitter acetylcholine from transmitting nerve impulses, and stops the muscle from contracting. But there are risks associated with the relief and advocates such as Public Citizen and Dr. Herzog feel those risks should be understood.

"While I see the benefits of it as a therapeutic tool," states Dr. Herzog, "its applications in humans are increasing and it is important we understand more about this product, which is a toxin."

In the UK, there has been a push to tighten regulation of the Botox injection industry and have it fall under the Healthcare Commission. However, the British government has chosen to allow the industry to regulate itself, and will revisit the issue in 2010.

Meanwhile, healthcare practitioners advise that patients should only receive Botox injections in a proper facility equipped to deal with anaphylactic shock, a rare but extremely dangerous reaction to the drug.

More News
Oh, and one more thing: while Botox was only approved by the FDA for injection between the eyebrows in the forehead for cosmetic purposes, Botox clients have been known to have received injections lower down on the face, in an effort to erase crow's feet and laugh lines. From a therapeutic standpoint, Botox is also approved for the treatment of neck spasms, known medically as Spasmodic Torticollis.

Those neck muscles and lower facial muscles are dangerously close to esophagus muscles that control swallowing. Many of the reported adverse effects relate to difficulty swallowing, and some deaths have been due to aspiration pneumonia, which is the ingestion of foreign objects, or fluids into the lungs. In other words, if the botulinum toxin migrates to the muscles that control your swallowing, suddenly you can't divert food to your stomach and away from your lungs.

As a Botox patient, if you weren't made aware of these risks, you should have been.

Your lawyer should be aware of them too.